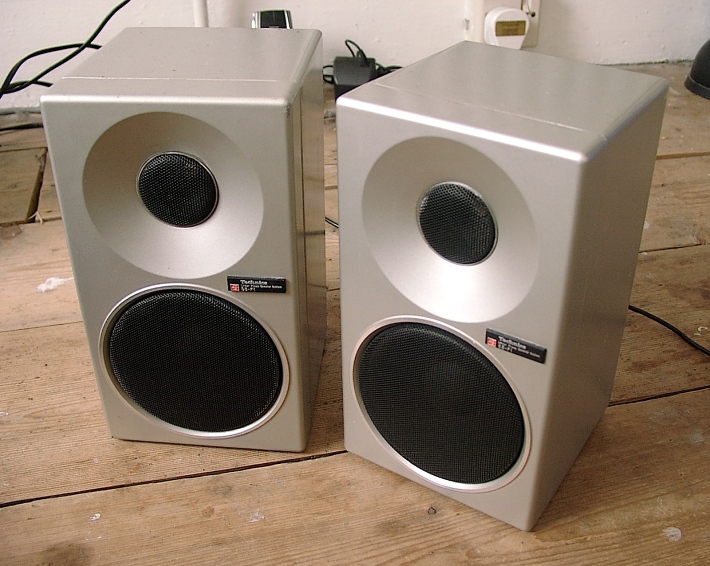 Ever since the original Goodmans Maxim of the nineteen sixties, there have been countless small hi-fi loudspeakers on sale, but very few miniature ones. How many specialist hi-fi brands can you think of that have made serious speakers small enough to fit in the palm of your hand?

Well, if there was ever a country likely to manufacture such a thing, it would of course be Japan. With twice the population of this crowded country in a similar landmass, space is at a premium, and with large disposable incomes and an insatiable appetite for quality audio, sound is too. Put both together and you have a massive market for ‘mini-compo’ systems, some of which are capable of superb sonics.

The whole tiny hi-fi thing kicked off in earnest in Japan in the late seventies, with the advent of the Aurex microsystem and the Technics SL-10 – the former was a suite of expensive miniature electronics with sound that battered similarly priced full size separates, the latter an epoch-making fully automatic quartz locked direct drive linear tracking turntable, complete with its own moving coil cartridge and head amp(!), that at 300mm square was barely larger than the size of an LP sleeve!

The Aurex stuff went on to spawn a number of imitators from the likes of Aiwa (the microsystem) and Mitsubishi (the M-04). The Technics went on to spark off a whole generation of small parallel trackers, using the same basic architecture but never built as well, from a wide variety of manufacturers – not to mention the SL-15, SL-7 and SL-5 variants of the SL-10. But what then of loudspeakers to partner these microscopic marvels? Well, not a lot of people know this, but…

The most striking thing about the SB-F1 is its size – or lack thereof: it makes a Linn Kan look like a KEF 105. Next, you notice the clean styling – which looks as fresh on 2005 as it did twenty five years earlier. Then, when you pick it up and hold the base in the palm of your hand, you realise that it’s something different – like the British winter, it’s cold and heavy. Yup, the SB-F1 is made of cast aluminium alloy, and a lot of it!

The speaker uses a clever clamshell construction. The front and rear sections are pulled together, under tension, by a single central bolt with a Philips screw head. Unscrew this and the SB-F1 comes apart, to reveal the fact that the cabinet walls are super thick (hence the weight) and rigid. Inside is a tiny 100mm paper woofer, wired to a quite complex crossover sporting high quality passive components, and a 25mm paper cone tweeter – both bolted rigidly to the inside of the front clamshell. The use of lightweight paper drivers (Audionote AN-E owners know this) ensures a surprisingly high 86dB/m sensitivity figure, which is amazingly high for a sealed, infinite baffle design with next to no air inside the cabinet! Of course, high power transistor amplifiers only need apply… A 40W RMS maximum output power is specified, and there’s a crossover protection circuit reset button on the back of the speakers for when the inevitable comes – proof that these babies were designed for pro (near field monitoring) use too.

Sound is superb – for the size. You’ll not be knocked back by their physical presence in the room, believe me, but they’re a surprisingly commanding listen and musically articulate like few others. Indeed, you could think of them as a Japanese Linn Kan I. Brilliantly fast and engaging, they make music bounce like few others. Don’t expect a beautifully svelte and smooth sound though; they’re not the last word in refinement – the AR18S is a good yardstick…

These days, you’ll not find too many around; they weren’t exactly a runaway sales success, but they’re well worth investigating for a second system; price is what you pay for them. A mint boxed pair should command several hundred pounds, while dog-eared examples would probably go for one tenth of that. Still, procure a decent pair and you’ll be a firm believer in that old adage, ‘less is more’!