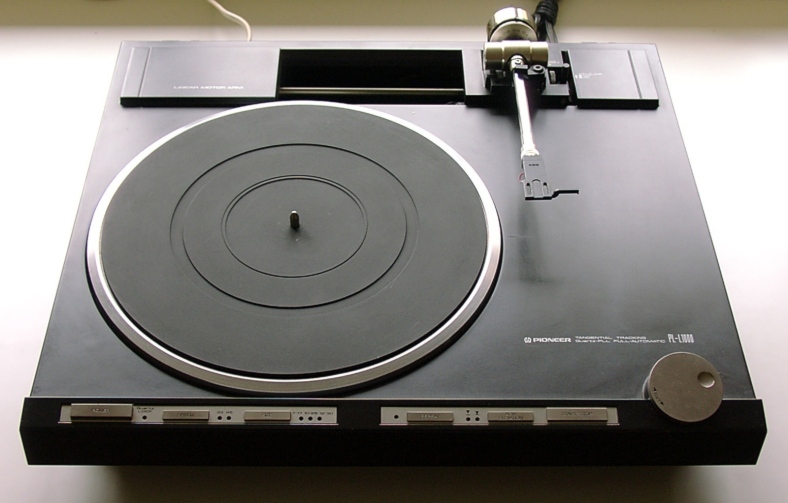 Looked at from a British perspective, in the late nineteen seventies, high end turntables started with Rega’s Planar 3 and ended with the fully loaded Linn Sondek. That was it, end of story. But actually, any audiophile looking East in those heady days when belt-drive ruled the roost, and direct-drives were deemed ‘unmusical’ by the UK press, would have found some amazing high end turntables coming from Japan, some displaying massive engineering depth. Pioneer’s flagship parallel-tracking, quartz-locked, direct-driven, independently sprung subchassis turntable was just this…

Selling for roughly three times the price of a Linn LP12, the PL-L1000 was a beautiful machine, engineered to the very highest standards. One touch of its controls, and you just can’t fail to be impressed by the quality – from the turn-wheel tonearm cueing control to the crisp, muted ‘click’ of the lift/lower microswitch. That parallel tracking tonearm is brilliantly done, but it’s nowhere near as fussy as many modern designs – it glides silently across the disc, tracks securely and returns to its rest silently at the end of the disc.

The turntable motor unit is also impressive – from the heavy, dynamically balanced cast aluminium alloy platter and thick rubber mat to its aluminium plinth and steel base, the former separated by the latter by Pioneer’s clever ‘coaxial’ spring suspension system. Yes, this deck is just as ‘sprung’ as a Linn Sondek, yet it is very subtlety done and you would’t notice if you didn’t look for it – the arm, platter, bearing and motor hang from rubber coated internal struts (not dissimilar to SME’s Model 30), immune from the vibrations the platter and base pick up. The bearing housing is a robust alloy casting which encloses a finely machined spindle, and the motor a brushless, slotless linear design with a phase-locked loop quartz circuit that keeps wow and flutter down to a vanishingly low 0.02% WRMS.

The sound is as slick as the ergonomics – it has a very smooth, open, neutral character which is far less showy and in-your-face than rival Technics direct-drive motor units, for example. Bass is superb, taut and tight and powerful and punchy, yet integrates beautifully into a wide-open midband; here you really begin to enjoy the effortless stability and rock-solid stereo imaging that a properly implemented parallel tracking turntable can bring. Treble is crisp, open and extended, giving an overall sound that is very similar to the master tape, and far less skittish than most conventionally armed turntables. In short, it is superb, and it’s all the more surprising become this comes from a fully automatic deck with a ‘weather eye’ on convenience.

Needless to say, PL-L1000s are thin on the ground – many in the UK were skipped in the nineteen eighties when the magazines sniggered at the allegedly ‘awful’ sound of Japanese direct-drives, having only ever heard bottom-of-the-range designs, yet untroubled by making sweeping generalisations. Happily, there are a good few more still turning in Europe, the USA and Japan. Long may they run!