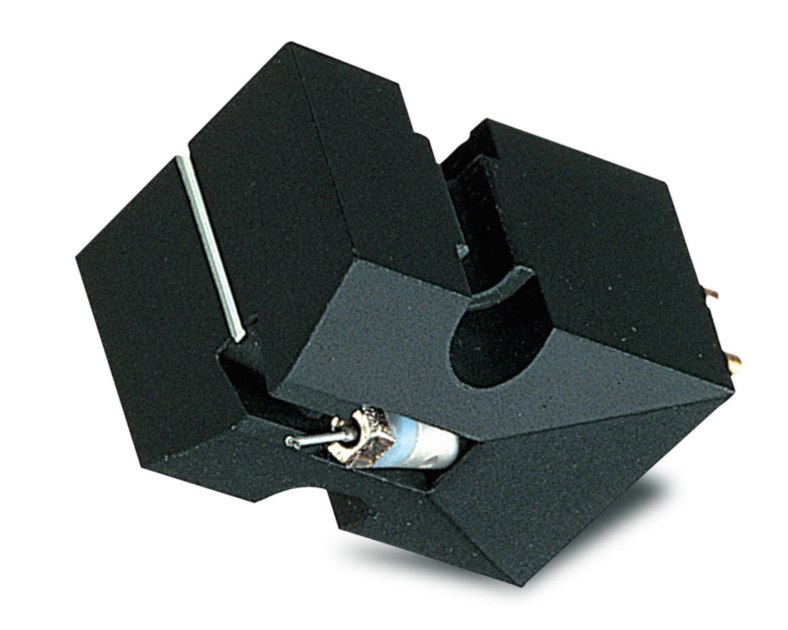 There are few other more controversial cartridges than this. Some believe it to have some magical, innate musicality which is simply not available from virtually every other pick-up. Others think it is an outdated old bruiser, completely out of its depth in the modern age. Having owned several variants, all purchased new and unmodified from Denon in Japan, these days I tend toward the latter point of view…

The cartridge was first launched in 1962, as a high quality yet sturdy moving coil for professional broadcast use. Since then, Denon has never stopped production, but has launched a bewildering variety of versions. In standard form it seems positively prehistoric compared to modern pickups, sporting a plastic body, aluminium cantilever and 16.5 µm spherical stylus; none of which are ideal materials to provide optimum sound quality in the twenty first century.

These days, the trend is towards skeletal bodies, or lower resonance, curved composites which trap fewer standing waves. Aluminium is one of the cheapest cantilever materials and is not loved by cartridge designers; the better sounding moving coils tend to have elaborate crystal types or hybrid metals. Spherical styli are the province of the least expensive moving magnet cartridges; the tip is purposed to plough through dusty grooves at relatively high tracking forces. All these factors, combined with the cartridge’s low compliance (5cu), make it ideal for applications where reliability and durability is paramount – as opposed to sound.

Claimed frequency response of the DL103 is 20Hz to 45kHz, with just 0.3mv output; output impedance is 40Ω, load impedance is 100Ω. Quoted channel separation is over 25dB at 1kHz. None of these figures compare well with, say, the similarly priced Audio Technica AT-F7; with the output level being closer to what you would expect from a nineteen seventies Supex. The 8.5g weight isn’t a problem, but the quoted tracking weight of 2.3 to 2.7g is poor by modern moving coil standards; normally we’d expect a good modern MC to track around 2g.

All this means the Denon needs a sympathetic partnering system, and those who get the best results from them give it precisely this. We’re talking a high mass tonearm here, the sort found – predictably enough – on nineteen sixties and seventies integrated turntables such as those from Lenco, BSR and Garrard. In modern hi-fi terms, it works better on an SME Series V or Linn Ekos than on many others, but to really partner it properly you need to wander far from the tonearm mainstream.

Sonically, the stock 103 is a feisty performer; you can see why people like them because they dive into the spirit of the music like a Decca; there’s a sense of power and passion and nothing is ever dull or boring. Trouble is, once you hear beyond this, you realise there is a real lack of tonal colour – the 103 has a slightly warm upper bass which conveys a sense of fulsomeness to the sound, but you find this never leaves the music. It’s as if the DL103 is an effects processor, and every LP you play ends up with the same tonal flavour – whether it’s dry seventies rock album or bright, shiny eighties pop.

Bass is rather wooden, too. Superficially it’s quite bouncy but tends to make everything sound slightly samey; again it’s the cartridge adding its character to the music, overpowering it. The midband strikes up a strong central stereo image, with images clearly located, but there’s relatively little stage left or stage right. It lacks depth too, sounding more like processed mono than seamless, walk-around stereo. The stylised stereo soundstage, plus the robust bass and fine rhythmic pace gives an engaging sound but it’s an artificial one nonetheless, like it has gone through an effects unit. Finally, poor treble strips the recording of subtlety and finesse; like a ‘high filter’ on an old music centre, it removes the lustre from cymbals and lops the top off high piano harmonics.

I understand why some people like the Denon DL103, because its brusque, propulsive sound will wake up a dull turntable, amplifier or loudspeaker (unsurprisingly many 103 fans use tube amps) – and it’s certainly good value at £170. But drop it into a well balanced modern system and the magic begins to wane. By modern standards it’s a crude device, and while the more expensive variants ameliorate this slightly – adding clarity, low level detail and better finessed treble – it’s still a case of polishing something that’s not really worth polishing. Personally I’d buy an Audio Technica AT-F7, AT-OC9 or better still scrimp and save for a Lyra Delos – now that’s a cartridge you’d really want to pick up!