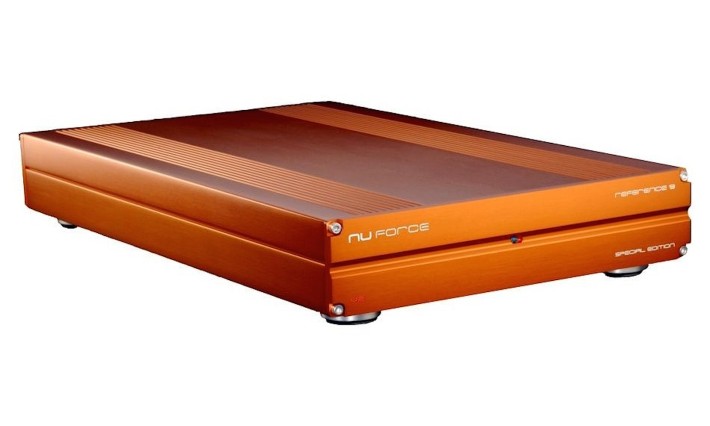 California-based NuForce launched its first range of Class D amplifiers at Las Vegas CES in 2005, with the initial products being the Reference 8 and 9 monoblocs. There was a choice of Reference 8 single-ended input (RCA) at £635 and Reference 8b balanced input at £700 (giving a claimed 100W RMS), plus the 160w Reference 9 with balanced and single ended inputs at £935 (with 160W RMS). The 9SE mono block was launched in 2008 in the UK and sold for £1,550, and added special internal componentry and wiring, plus a more elaborate power supply.

It isn’t just the distinctive, optional burnt orange (“Rose Copper”) aluminium casework that’s different about this tiny power amplifier. Inside is a novel variation on Class D amplification; a super high frequency PWM switching circuit produces the output waveform from the power amplifier, and its very low distortion is achieved by building in a local feedback integrator around the switching circuit to ensure that the average output voltage from each digital switching cycle is exactly equal to the reference (desired) output voltage. NuForce says this eliminates the need to take overall negative feedback from the output of the filtering circuits to the loudspeaker load, which complicates feedback and limits the bandwidth of Class D amplifiers. The reduced component count increases overall energy efficiency over Class D, and reduces heatsink and cooling requirements, overall size and cost, it is claimed.

Because of the diminutive dimensions, it’s a tight fit inside, with closely packed surface mount circuit boards, a sprinkling of bespoke NuForce ICs and NuForce audio-grade capacitors. The 9SE boasts an elaborate power supply with a vast bank of small capacitors (as opposed to two large caps on the standard, cheaper non-SE version). Further enhancements include a separate switching power supply for the analogue front end, and improvements to the signal input section, including higher quality input capacitors, and the installation of premium 6-nines, oxygen-free copper input wiring.

It is surprisingly compact considering its claimed 160W RMS power output. Round the back is an IEC power socket and an on-off switch. With its tiny current draw, you can leave it on permanently if you so wish, and the unit auto-senses voltage (from 84-264V). There’s a pair of rhodium over copper speaker binding posts and single Cardas phono input, plus an XLR input too (complete with a microswitch to toggle between balanced and non-balanced operation). The brushed, anodised aluminium casework is largely non-resonant, and electrically screened so the amps can sit one atop the other. Finish is superb.

This is a very fine power amplifier, if you like them sounding tight, clean and open. It is effortlessly powerful and goes loud with grace. It is even and balanced in tonality, indeed if anything it’s a little soft and lacks the chromium-plated midband of some Class AB designs. Smooth as it is, you wouldn’t call it velvety – it’s not in the business of warming the sound up or adding sumptuousness. Bass is taut and controlled, and decently tuneful. The midband is surprisingly three dimensional with an architectural feel – everything is in its rightful place, nailed to its proper location within the recorded acoustic. Clarity is superb, with a massive amount of musical information coming through with speed and rhythmic alacrity. Treble is no different; it’s smooth and silky when called upon so to be, but is strong and atmospheric as the occasion demands.

You’d never call the NuForce a romantic thing to listen to; it’s not going to please fans of parallel single ended tube amps, for example. But in its own field it works as a brilliantly neutral tool that drives virtually any loudspeaker with ease. Some may not like it, simply because of its lack of ‘character’ – it gets on with the job in hand, and does it with great aplomb. Switch it on and you won’t think it’s muscular, powerful, sweet, smooth or any other such thing, nor will you find any single vice. Rather, love it or hate it, the NuForce Reference 9SE just plays music.