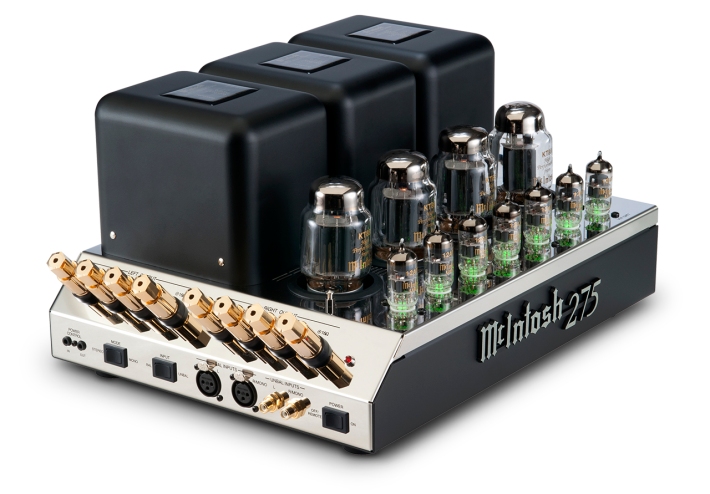 McIntosh is a redoubtable marque with an illustrious history of producing very high quality products. The huge MC275 power amplifier is now in its sixth generation, the first one appearing way back in 1961. Designed by company co-founder Sidney A. Corderman and Gordon Gow, they introduced the classic McIntosh Unity Coupled Circuit which used a special transformer that allowed wider bandwidth with lower noise than conventional valve amplifiers. It gave the original an sublime sound, and it has duly become very collectable.

This latest incarnation, launched in 2012, offers these traditional values in a modern setting, one might say. With circuit boards instead of hard wiring, selected passive components and the latest McIntosh output transformers, it’s a thoroughly modern bit of kit. The power supply uses solid-state rectifiers, as opposed to valves, which some purists may frown at, but it is choke-regulated. One distinctive feature is the row of LEDs running along the seven smaller tubes, showing whether they’re working or not – amber denotes warm up, green normal and red means they’ve gone bang, although you’d probably soon discover that anyway!

It’s a beautifully finished beastie, with its polished stainless steel base and huge, chunky ‘Autoformers’ it weighs in at 34.1kg. It’s also very different to its rivals, Chinese or otherwise, because it’s heavily Class B biased, and has lots of negative feedback to keep the four KT88s honest. This isn’t how you’d ideally do a tube amp in my view, unless you were going for one thing in particular – power. And so it proves that the MC275 is a massively muscular machine, offering a claimed 75W RMS per channel, this is absolutely exceptional in tube amp terms. KT88s are linear things, and prove robust even when run to the max – and the big McIntosh surely does this.

If you like soft, sweet, sumptuous sound – dare I say it, dull and warm and gloopy – and some do, then this won’t be for you. It’s no single-ended triode design putting out a handful of watts and purposed for horn loudspeakers. Rather, it’s big, full bodied and ‘comin’ at ya’! Rather like a Harley Davidson Sportster motorcycle, it has a simple but undeniable charm; it does what it says on the tin, and if you like the tin then you don’t buy it. Tonally it is well lit and highly defined, so much so that it will grate like hell through horn speakers, but then again you don’t need to partner it with such because it doesn’t produce less power than a tired glowworm! Instead, you can wire it up to pretty much any modern speaker, the bigger the better, and the big Mac will flap your flares.

Its quoted damping factor of 22 isn’t going to worry a solid-state amp but is better than many tube designs and you can hear it in the taut (for a valve amp) bass. It thumps along in a bouncy and highly rhythmic way with huge motive force. Further up things are wide and spacious, and a little smoother and sweeter than you might expect. Treble wins no prizes for transparency and silky sophistication, but it’s certainly well defined and crisp and gets the job done seamlessly.

You can push the McIntosh really hard, and when you do it starts to clip in the way you’d expect a transistor amp to; there’s no flatulent farting noise from overloading output transformers here. This happens at surprisingly high levels, and with most modern speakers of a sensitivity of around 89dB or above, you’ll be worrying more about your hearing than the speaker voice coils. The KT88 really shows its mettle here, it’s a power valve designed for audio and McIntosh has got it working as designed. The small McIntosh branded signal valves – 12AT7s and 12AX7s – are decent enough but there’s room for experimentation at a later date, for fancy designer and/or NOS stuff if that’s your thing. But as supplied, the MC275 still sounds a heck of a beast!

It’s a great bruiser for those who crave big, bold tube power. But many valve amp aficionados will think it has a rather homogenous tonality that the better tube amps lack; it just doesn’t have the transparency or the insight of a pair of Icon Audio ST845/IIs, for example, let alone a GRAAF GM 400. Rather, it gives you its own very partisan view of the music – it’s a great fun one, but not the world as it is really lived.

McIntosh’s MC275 is a tube amp with a difference, then – it can go thundering into traditional transistor power amplifier territory and put the cat amongst the pigeons. Many solid-state fans will adore it, not least for its far more exotic looks than any transistor power amp can offer, but tube fans might find it rather gauche sonically. There’s so much to like about this £6,000 design then, but it still won’t be for all.