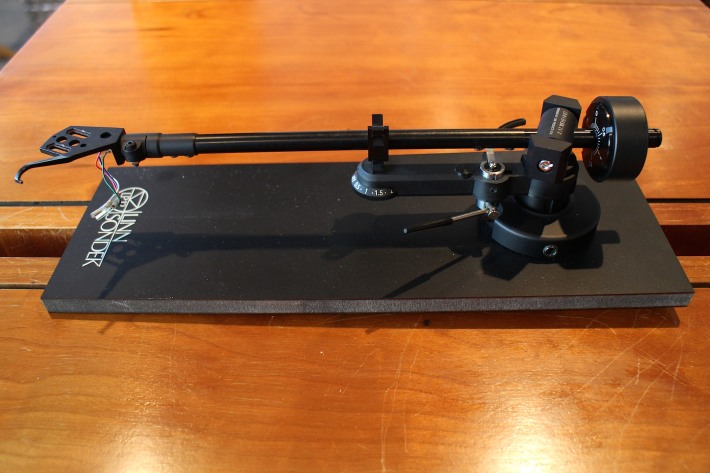 By 1979 Linn had a problem, although admittedly it was a nice problem to have. The trouble was that the £298 Sondek LP12 turntable was truly taking off – sales were going through the roof – but not everyone could afford the company’s new Ittok LV II tonearm, which cost a cool £253. Instead, large amounts of sales were going to Rega; its £46 Japanese built, Acos-derived R200 arm worked a treat in the Sondek. Understandably, the Glasgow company felt it was missing a trick, and off it trotted to Tokyo to do a deal for a Linn-badged tonearm.

The result was the Basik LV V, a £50 S-shaped design looking remarkably similar to the arm that appeared in the £70 ADC 1500 turntable, and coming with a Linn Basik cartridge as standard – effectively an Audio Technica AT-93E with a glued-in stylus! The magazines raved about it of course, but in truth it wasn’t as good as the Rega R200, and the R200 wasn’t as good as it should have been to sit in an LP12. What Linn needed was a sort of turbo-charged Basik LV V, something that didn’t sound as vague and flat but which was still highly affordable and felt slightly nicer to use.

This was the result. The first LV X arrived in 1984 and sold for £96 in the UK, complete with the aforementioned cartridge. It was  basically a re-tubed LV V; sporting a (then fashionable) long and thin, satin black-painted alloy armtube and better bearings. Funnily enough, it bore a family resemblance to ADC ALT1 clone fitted to the ADC 1700 turntable, minus the ‘ultra low mass’ fixtures and fittings (i.e. the counterweight, etc.), although it was apparently done to Linn specifications.

Actually, the LV X was a good little arm, but that’s all it was. It was never great, the main reason for buying it being that it was a little tighter and more detailed sounding, with slightly more solid and tuneful bass. The problem for the Linn was of course the Rega RB300, which appeared in the summer of 1983, and was so much better than similarly priced (to its £90 retail price) designs that it made them all not worth bothering with. This applied to the Basik LV X too, and Linn’s retort was to introduced the LV X+ version, which for an additional £15 dispensed with the detachable headshell (surely making it cheaper?) and added slightly better wiring. The Basik LV X+ was slightly tauter and more focused than its predecessor, with a tiny bit more detail and a fractionally more spacious treble, but the differences weren’t profound.

Nowadays, the best you can say about them is that they’re good starter arms. The bearings are fragile, and most will have been jiggered by now, so do check carefully for signs of play and friction. The good thing is that there are a lot of them around – many were also fitted to the first generation of Linn Axis turntable, further increasing their ubiquity, and make came supplied with early eighties mid-price motor units, such as the Systemdek II for example. Pay no more than £150 for a minter, and don’t expect miracles; a well preserved RB300 sounds better and is also way more tweakable.