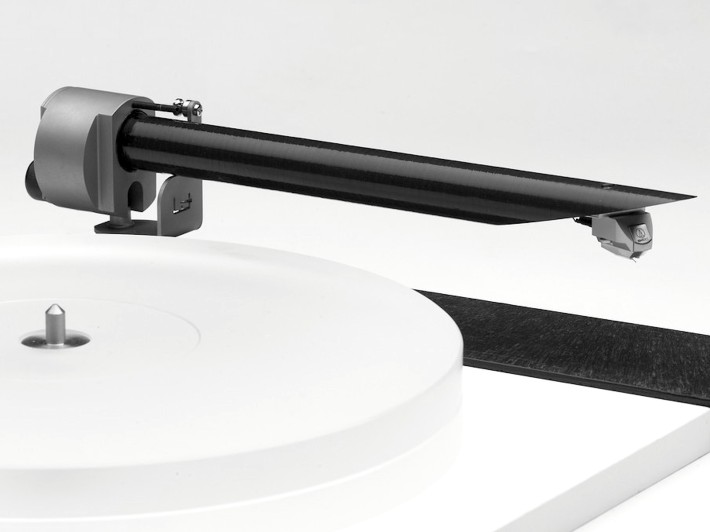 A wonderful country for sure, but not the first place you would associate with hi-fi pickup arms. But then New Zealand is full of surprises, and the Design Build Listen Wand tonearm is one of them. Designer Simon Brown has come up with an interesting product, one that reminds us that there are few new such things on sale – from Regas to the SMEs, most tonearms around now have their roots in the nineteen eighties. Underlining how modern this design is, he says wryly that the Wand is “not your gran’s gramophone”!

The cornerstone is of course that thick 22mm carbon fibre tube, with an integrated headshell – or more accurately, cartridge mounting assembly. The headshell of course is a traditional source of woe for a tonearm, and so it makes sense to eliminate it – although admittedly it is harder to install and remove cartridges than with, say, an SME 309. A nice touch is that there’s no need for a finger lift, because the end of the armtube (nee headshell) provides precisely this facility.

At the other end of the arm is the combined bearing housing and counterweight, and these are also beautifully yet simply done. A chunky 50mm machined billet of stainless steel holds the bearings, and underneath this is a cutout for the pillar, along with an adjustable plate on the end to balance the arm. This can be changed for one of higher or lower mass to tailor the whole tonearm’s effective mass to the cartridge bieng used, and also effectively means the counterweight is underslung below the bearing pivot to help the arm to ride warps better.

You would never accuse this tonearm of being the easiest to set up or use, but once it is correctly fettled it seems to stay that way – and the stainless steel tool supplied with the arm makes getting to this point easier than it otherwise would be. It neatly combines the functions of alignment protractor, height gauge, cartridge alignment jig and spanner; like the arm itself its simplicity belies its power! The Wand’s single-hole fixing can be married to a range of beautifully finished mounting plates for SME, Rega and so on. There are a variety of wiring options; I tried the Cardas variant.

Mounted on a Michell GyroDec, this arm sounds clean, crisp and elegant. You do not automatically associate unipivots with an ultra fast and snappy bass, but The Wand proved surprisingly lithe low down, yet quite meaty too. It certainly doesn’t have an anaemic bass – which can happen with this type of arm – and instead thumps out a solid, robust bottom end with very little overhang. Whilst not the absolute best that money can buy, it is certainly superb at its price. And this picture continues up into the midband, where we find a clean and spacious soundstage with large amounts of detail. In this respect it sounds quite Rega-like and certainly not like the more romantic sounding Hadcocks of yore. Treble is spacious and smooth, again better than expected from budget unipivots which often sound rather vague and nebulous.

In some ways, The Wand presents itself as a tighter, tauter, leaner Roksan Nima – another excellent modern unipivot. It has great speed and a musical lucidity that makes you marvel at the insight and articulation that vinyl can offer. It resolves the timbre of acoustic instruments incredibly well considering that – in the form tested – it costs under £500, and yet doesn’t do this to the exclusion of other aspects of the music. It’s pacier than a Rega RB251 through the midband, and conveys the subtle inflections of phrasing better too. The biggest drawback is its soundstaging, which is wide left-to-right but doesn’t fall back quite as well as similarly priced arms from Rega, Roksan or Jelco.

Overall, this is an audacious first tonearm from Design Build Listen. It’s the best built and the best looking such product at the price or near it, yet it also performs exceedingly well from a sound quality point of view. The only caveats are those which are typical of its type; unipivots are fiddly things to set-up and also to use, and its want of a cueing lever (in standard form) only makes life more complicated for some. If it is the best performance at the price that you seek, you’ll think The Wand is magic.