Surprising as it might seem to some, the very first domestic quadraphonic recordings weren’t vinyl-based at all, but open reel – which was seen by many as the only serious music carrier around. A handful of music companies released 4-channel prerecorded reel-to-reel tapes as early as 1969. Fully discrete quadraphonic (using completely separate channels right along the replay chain) wasn’t a practical domestic proposition however, as few could afford expensive reel-to-reel tape decks, and buy their music on 10.5 inch spools of magnetic tape, so vinyl stepped in to fill the void…

When Peter Scheiber presented a paper to the Audio Engineering Society on how to make two channel recordings matrix to four channel quadraphonic, LP-based quad finally became a reality. CBS Records duly snapped up the rights and spent a couple of years developing the hardware. Then in 1972, SQ (Surround Quadraphonic) was finally launched to a bewildered public. Naturally CBS wanted every other label to pay royalties, which went down like a lead balloon, so arch rival RCA (part owner of JVC) came up with an altogether more elaborate, non-matrixed system called CD-4 (Compatible-Discrete four channel). This required special records with a much steeper cut angle than conventional LPs, to enable a high frequency “carrier” signal. Although a superior system in theory, offering proper ‘discrete’ surround from vinyl, it became troublesome in practice.

The smaller labels had a choice of either paying royalties to RCA or CBS, or developing yet another system, which they duly did! Just as CBS was making SQ a commercial reality, so Sansui was developing its own matrix system. A smallish Japanese hi-fi specialist with no record manufacturing arm, it proved an ideal partner for other record companies outside the ambit of CBS and RCA. Thus was born QS. In 1972, two Japanese audio industry bodies tried to make sense of the situation, and designated QS as the RM (Regular Matrix) system.

The result of three new systems rolling out in the space of a year was, as you’d expect, sheer confusion. The essential similarities between SQ and QS, and their complete incompatibility with CD-4, were hard to explain to music buyers who’d only just started routinely buying stereo LPs! The fact that SQ and QS matrix decoders could not demodulate CD-4 records to give discrete four channel surround, yet could ‘synthesise’ surround sound in much the same way as Dolby Pro Logic II does today, was even harder to explain to bewildered buyers. As for CD-4, suffice to say that the hi-fi magazines of the day had an uphill struggle in explaining it to a perplexed public!

Despite this, the industry made a concerted collective push on both hardware and software. Hundreds of titles appeared, ranging from Hot Butter, Barry Manilow, Cat Stevens, The Temptations and Frank Zappa on CD-4, to Billy Joel, John Lennon, Pink Floyd, Santana, Paul Simon, Sly and the Family Stone, Steely Dan on SQ. Even 45RPM singles got quad releases, the very first 7″ SQ release being Art Garfunkel’s Mary Was an Only Child on CBS. Despite their endeavours, in the classic mould of a hi-fi format war, no sooner had the legal wrangles been resolved, the products developed and debugged, advertising money spent and the magazines invested countless column inches on explaining it all, then the whole quadraphonic shebang fell flat on its feet!

Although ‘quad’ can be viewed as an object lesson in how not to develop a new format and present it to the public, it wasn’t a complete waste of time. It’s a matter of historical record that the format(s) flopped, but there were still several redeeming factors. First, they did sound quite good. Matrix quadraphonic synthesised from stereo could actually be highly impressive, despite the relatively poor separation of early decoders. CD-4, in theory a fully discrete system, was capable of excellent results – although of course it couldn’t always achieve them in practice.

CD-4 also brought vinyl some valuable spin-offs. For example, JVC developed its own special virgin vinyl formulation with super low noise and wear characteristics, which went on to be used in many Japanese-pressed stereo LPs – and even Mobile Fidelity Sound Labs’ first Original Master Recording series. (Play a standard US pressing of, say, Steely Dan’s Aja against a Japanese version and you can hear the difference – the latter being dramatically smoother, sweeter and quieter sounding.) CD-4 also catalysed advances in pick-up cartridge technology – with the carrier running at 38kHz, it was necessary to develop a stylus profile that went deep into the record groove yet didn’t wear out the delicately embedded back channel information. The resulting, Japanese-developed Shibata stylus both contacted a larger surface area of the record and lessened groove downforces, sparking a wave of extended groove contact cartridges, such as Pickering’s ‘Stereohedron’, Stanton’s ’Quadrahedral’, Bang & Olufsen’s ‘Multi-Radial’ and Shure’s ‘Hyperbolic’. The benefits of this stylus tip transformed the next generation of cartridges.

Finally, much of that research work that went into matrix surround sound made today’s digital surround possible. It lay the blueprint for what is now proving to be the biggest revolution in recorded music since the introduction of digital audio – digital surround. Although it has taken a circuitous route via ‘home cinema’ and movie sound, multichannel music is fast becoming the new standard. To play the wealth of two channel music – the vast majority of most peoples’ music collections – matrix decoding is appearing again, albeit in digital format. Dolby Pro-Logic II uses a steering logic, just like the SQ and QS systems before it. In truth, it’s not far away from quad systems, inasmuch as it has full range front left and front right plus rear left and rear right. The only real difference between 4.0 and 5.1 are the centre and subwoofer channels – the former can easily be derived from summing the front left and right, and the bass channel isn’t needed with full range loudspeakers anyway – it’s more of a home cinema thing. In truth, the two systems work surprisingly similarly.

By 1975 it was all over for quadraphonic. Although RCA had poured millions of dollars into CD-4, JVC had single-handedly transformed vinyl pressing technology and the world had gained an important new stylus profile, the public simply didn’t want to know. A raft of new ‘bolt on’ quad formats arrived on the scene to confuse things still more (i.e. Denon’s UD-4, Stereo-4 and Dynaquad). Quadraphonic preamps, decoders and receivers got ever better – the 1976 model year designs were dramatically more musical than those of 1973 – but it was all too late. The equipment hung around in manufacturers catalogues until as late as 1977, where Sony – for example – was still proudly displaying its high end SQ decoder, but the end was nigh for quadraphonic and by 1979 the whole gloriously ill-conceived project had simply disappeared from the face of the earth.

QUADRAPHONIC – THE RIVALS
STEREO QUADRAPHONIC
SQ emerged from the CBS Technology Center in April 1971. Rear channel information was cut into the record using an intricate process which added double helical groove modulations, alongside vectored modulations for the front channels. By sensing the phase relationships between the channels, the SQ decoder attempted to send the appropriate signals to the appropriate loudspeaker. This idea of a ‘non-symmetrical phase matrix’ using phase shift networks to divide up the sounds was a very sophisticated one for 1971, and really pushed turntable technology to its limits. The results weren’t spectacular, giving only around 3dB of channel separation between the front and rear speakers – due to the need to retain excellent left-to-right separation at the front. Later ‘logic decoders’ gave far better results. Any matrix quad system (SQ, QS/RM, EV-4) decoded any matrix-encoded record, but the results weren’t always consistent!

QUADRAPHONIC STEREO
Sansui introduced QS in February 1972. Like SQ and EV-4, it could decode any matrixed quad encoded record, and synthesise quad from a stereo source. A very close cousin was RM (Regular Matrix), which is said to be QS but without logic in the decoder. QS was often said to be dramatically better than SQ when synthesising quad from a stereo source, giving up to 20dB front to rear separation and 10dB from left to right. By 1973, Sansui had developed its SQ decoders with logic circuitry and a range of parameter adjustments to give ‘Vario-Matrix’. The quad cognoscenti generally agree this works very well, making both stereo and matrixed quad discs sound very vibrant and engaging.

COMPATIBLE DISCRETE-4 CHANNEL
A bold attempt to give discrete four channel surround sound from vinyl, CD-4 pushed record manufacturing technology to the limit! Back in the early sixties, the idea of using a high frequency carrier signal (a la FM stereo) to handle two extra channels of audio information had been vaunted, and it was precisely this approach that RCA used for its CD-4 Quadradisc system launched in May 1972. Super-fine grooves were cut into the vinyl to carry signals between 35-50kHz, which the CD-4 demodulator sensed and ‘downconverted’ to the audio band of around 100Hz-15,000kHz, which were sent to rear channel power amplifiers and loudspeakers. A niche, audiophile system capable of great results, it was nevertheless painfully difficult to set up and maintain. Whilst the record pressing technology that JVC achieved was superb, the limitations of tonearms of the day created difficulties. Shibata styli needed tracking at less than 2g – routine today but fanciful back then. Mistreatment, dirt and worn styli simply wiped out the HF information, and problems with carrier lock-on complicated matters still further. Arms and cartridges had to be perfectly set-up to get a carrier at all, especially bias settings. Finally, CD-4’s channel separation wasn’t obviously better than later matrix decoders, which were far easier to use.

SOUND AFFECTS
Matrixed analogue quadraphonic (i.e. SQ or QS) sounds surprisingly soft, warm and cohesive. Anyone reared on digital surround will be amazed! Quad albums do really offer a sense of surround, with instruments moving around between all four speakers, but there’s a quite strong centre image – in part due to SQ’s poor separation figures. This isn’t a bad thing, however, as it doesn’t detract from the overall musical experience and can actually sound quite cohesive. The absence of a front centre channel simply isn’t obvious – frankly, you don’t need it. Ultimately, QS (RM) sounded more vibrant than SQ, but this could be down to the equipment used. Nonetheless, on well-recorded discs, the surround effect was obvious but not intrusive and in every case it seemed to easily surpass plain old two-channel stereo. The four channel analogue system seemed far more capable of driving the room, giving a broad, wide and deep spread of sound.

CD-4 was probably the most impressive in a ‘hi-fi’ sense – the back channel information was most explicit – although it didn’t gel and cohere as well as QS. Some CD-4 recordings showed crass use of multi channel mixing, spreading musicians all over the place needlessly. Generally, it was very much a case of arbitrarily placed instruments and voices in places with no reason or rhyme, although the occasional CD-4 cut, such as Harry Nilsson’s Nilsson Schmilsson, worked superbly with oodles of detail and clarity. Ultimately, CD-4 gives real sound fields between any combination of channels, which matrix recordings cannot – and it shows. 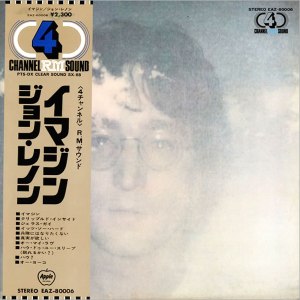