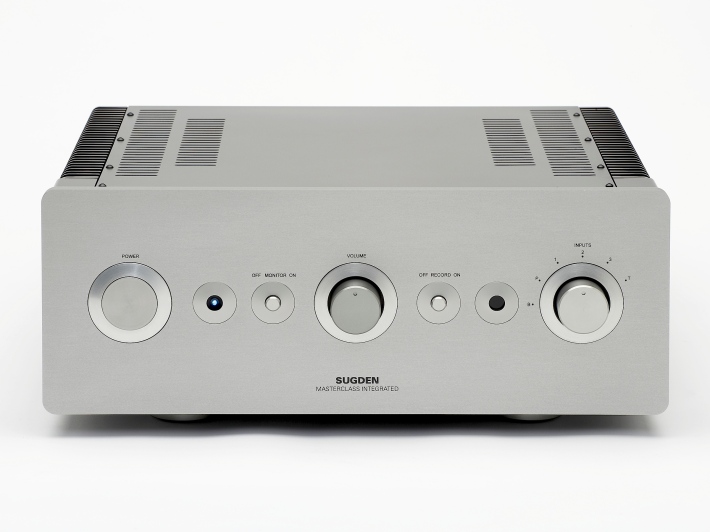 Launched a decade ago at £3,499, this monster integrated amplifier was a Sugden A21a on steroids. With substantially boosted power and extra facilities, the IA-4 set out to bring that crystalline Class A sound to a wider audience. The most obvious difference between it and its baby A21a S2 brother was its size; it’s a portly 22kg behemoth which owes more to Japanese monster integrateds in styling than anything from British shores. It’s chunky at 165x430x440mm but full of air it isn’t, because the sizeable casing is all about providing enough cooling for its full Class A circuitry which, like the A21a S2, runs hot.

Indeed, Sugden said the only real similarity to the A21a is the Class A output circuit, but this was heavily modified and located on new circuitboards, with careful improvements in capacitor smoothing and greater power supply headroom. Although rated at 32 watts per channel, the power supply was “massively over engineered”, with the main smoothing and decoupling capacitors being three times the physical size of the standard A21a with much greater current capabilities. This provided a thirty percent increase in the single ended HT voltage and quiescent current setting.

It’s an unusual hybrid design, with its single-end power output stage and a dual voltage DC coupled preamplifier. This requires two separate power supplies producing a true pre-power combination in a single box. Patrick Miller explained that, “the preamplifier required a dual voltage to operate our current feedback Open-Loop Transimpedance design – this has a wide-bandwidth capability and low distortion.” All inputs and outputs are relay switched with high quality silver contacts. A moving phono stage was fitted as standard, based around a dual bipolar/JFET operational amplifier.

The IA-4 is a nicely made product, but doesn’t quite have the silky feel of rival Japanese built Marantzs, for example. Sugden said the front panel was machined from, “one of the finest grades of aluminium available called gauge plate, a ground flat plate used in the production of dies and precision jigs”. All well and good, but the volume control doesn’t have the precise action that you’d expect at the price, and more worryingly the casework is too resonant. Rap the top plate with your knuckles and you get a rather undamped sounding ‘ding’. Two finishes were available, Titanium (silver) and Graphite (black).

Just like the A21a, it has a big, open and starkly translucent sound that’s a bit like opening your bedroom curtains to a crisp, bright summer’s morning – but there’s more of it. Indeed, the latter’s lack of power was always one of its biggest drawbacks, and it’s much less of an issue here. You might say it is ‘Class A without tears’, because most of what used to obstruct the enjoyment of the company’s fine amplifiers has gone. This amplifier still isn’t as commanding as a good Class AB design like a Naim SuperNait, but is far less concerned by the speakers it is asked to drive. Suddenly you don’t have to find particularly easy loads, and/or restrict yourself to low volumes.

The sound is razor-sharp and lightning-fast. Its upper midband is ever so slightly brightly lit, but this isn’t in any sense fatiguing in the way that many transistor amplifiers can be. Rather, it seems to throw everything into the mix into sharp relief, pouring a spotlight over all that’s going on. It has a wonderfully ‘up and at ‘em’ quality that just throws you right into the ‘fray’ of the musical event, leaping and bounding along with a tremendously carefree quality. Rhythmically it’s very special, sounding liquid and unconstrained in a way that few Class AB designs can.

I would never have expected to say this about a Sugden, but it is an assured performer. The soundstage is obviously more expansive than the SuperNait for example, and sends oodles of fine detail bristling out from the loudspeakers with tremendous clarity and drive. Its bass is strong like no other Sugden I’ve heard, midband lyrical and fluid, and treble beautifully finely etched. Sugdens don’t gild the lily – there’s no sense of artificial smoothing or warmth, which some expect from Class A designs – instead you get this wonderful matter-of-fact clarity that makes any Class AB sound mushy and opaque.

Anyone familiar with the Sugden sound will love its textural accuracy. At first listen the IA-4 simply seems ‘cleaner’ than other amplifiers, being very open and direct and telling you about the grain of the voice or the tonal patina of the instrument in great detail. It’s only when you revert to other solid-state amplifiers, some costing considerably more, that you realise that they’re terribly ‘mushy’, dull or coarse by comparison. For many, bored by solid-state’s greyness and homogeneity but not wishing to get into that whole new can of worms that are valves (with their associated colourations) this amplifier is a joy.

One of the best ever Sugden amplifiers, rarely do you hear an integrated that dives into music, throws out so much detail and strings it together in such a musically satisfying way. It’s not the best Class A design around, but still offers many of the qualities of high end ‘super amps’ costing many thousands of pounds. Being a niche product, the IA-4 hasn’t sold in vast quantities, and rarely appears secondhand because its owners hang on to them. Still, if you see one for under £800 and like the Sugden sound, snap it up!