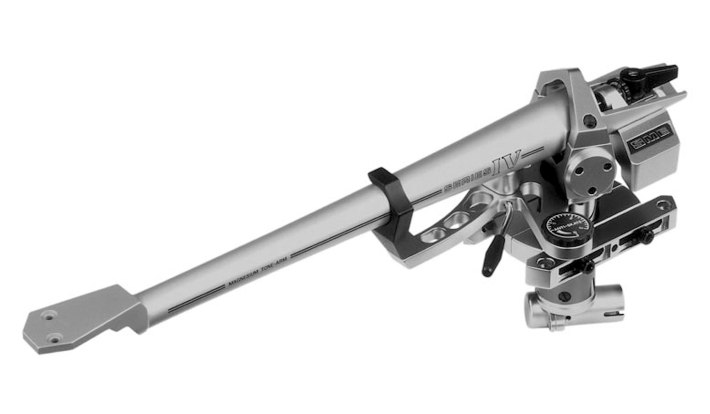 Just when it looked like vinyl was reaching its final hour, along came the SME Series V in 1986. The Steyning company had long used the tagline, “the best pickup arm in the world”, but if we’re frank it had become something of a joke. The SME Series III was far from this, and the only other thing the company offered was the flawed-in-a-different way 3009S2. The Series V then was like a bolt from the blue, the vinyl equivalent of Concorde to the VC-10 that was the SME III.

To be fair, the Series III had dared to be different, using a titanium nitride armtube for light weight and high rigidity. The Series V continued this innovative thinking, but this time the material was magnesium. As any motorsport fan knows, this is stronger and lighter than aluminium (which is why it is used in wheels, among other things), and as such makes for a fine material from which to fashion the armtube. This was cast and tapered to reduce resonances further; and differing wall thicknesses are used too. The lack of joints makes the structure ultra-rigid. The bearing housing was pressure cast from zinc alloy; large bearing races form the bearing surfaces on a tool steel shelf, and beyond this sits an underslung counterweight close to the arm’s pivot point.

The SME Series IV came out the following year, costing approximately one quarter less by deleting the V’s fluid damping system, silver Litz headshell wires and sprung tracking force system. Interestingly, these are all features of debatable, if not deleterious sonic merit anyway, and there are some who feel that (given the Series V’s wiring) the IV is actually superior. The only obvious demerit is the slightly lower tolerance bearings, but the IV’s are still so high that again this is an arguing point. It certainly feels identical to use – hand cueing this arm is like handling the best Leica camera.

It’s also extremely easy to set up very accurately, and the instructions are exemplary. The arm comes in a sled, and once installed on the armboard can be cranked forward and backwards with great accuracy. Changing cartridges takes a matter of minutes and can be done consistently time and again; contrast this to fuss that Linn’s Ekos demanded and it was hard not to take to the SME – it makes all its rivals seem positively Neanderthal! With an 11g effective mass, the Series IV will track most cartridges without any drama, and the SME V’s fluid damper is available as an option if desired.

Sonically, the SME IV (and indeed V) brings immense clarity to vinyl replay. Imaging and soundstaging are superb, while frequency extension is unmatched – bass is extremely tight and controlled, treble glass-clear. The only criticism is the rather dry, analytical sound; there’s a conspicuous lack of euphonic coloration, and this can be a little stark for some tastes. The upside of this is the brilliant ‘deconstructive’ talents of this pickup arm – it can scythe through any mix to tell you precisely what’s there and how it was recorded. Bass is stunning – rock-solid, vice-like and possessed of tremendous energy and articulation. Midband is three dimensional, with brilliant image placement. Treble is smooth and open and wonderfully extended. Dynamics are gobsmacking, and I found myself looking for big, impressive sounding productions to amaze myself with hi-fi!

Trouble is, the SME Series IV has a certain ‘mechanical’ nature to the way it goes about making music that is less beguiling than some rivals. It gives a dramatic seat-of-the-pants sound, but can sound eerily distant from the emotion of the music. In this respect, some would argue that even the venerable 3009S2 is better; certainly the IV isn’t the world’s most romantic performer and this goes against what many people want from vinyl. What is, if it is not sweet and warm, they may say?

The top SMEs are masterpieces of design, and look absolutely bang up-to-date even today, twenty nine years after the original design surfaced. This is a staggering achievement, and the sound is no less impressive. The problem that these arms have though is that they’re not everyone’s cup of tea; brilliant in most respects, they seem less adept at areas of performance which many vinyl fans instinctively regard as key. The trick is as ever, go and listen to one, and then if you do bite then carefully build your system around it.