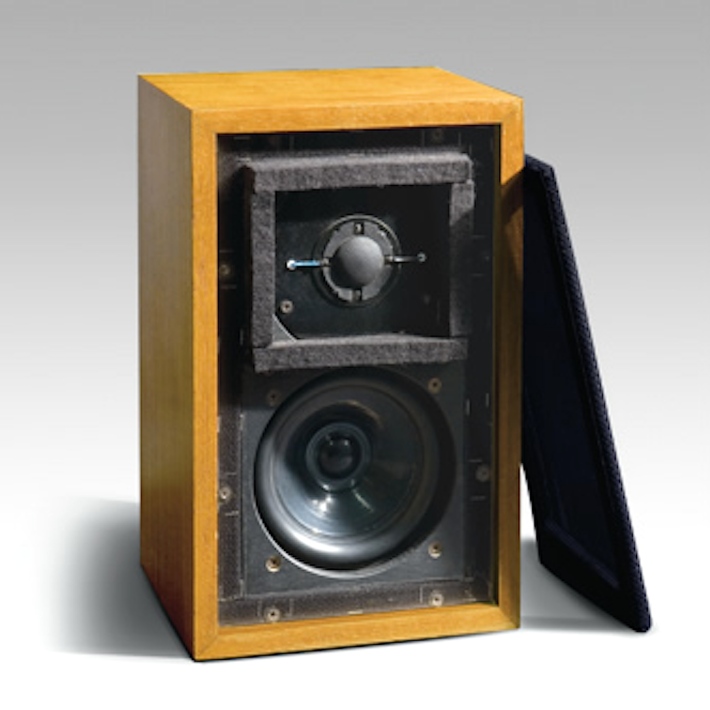 The BBC ‘monitoring loudspeaker type LS3/5a’ has become the stuff of legend. Some think it has unique qualities which have never been seen in any subsequent speaker, others believe it to be overrated and unjustly worshipped. Whatever your take on this little box is, there’s no denying it’s a significant product in its own small way…

What was revolutionary about this mini monitor was its performance relative to its physical dimensions. Before the advent of the LS3/5a, all small speakers were regarded as sonically inferior to larger ones. There was no sense that a diminutive design could in some ways better a big one. Whether you love or loathe the LS3/5a, you can’t deny that it changed this preconception. “It’s a loudspeaker that gives the impression of having a lot more bass than it actually has,” says Spendor’s Philip Swift. “Nobody put so much effort into compact, low coloration loudspeaker than the BBC.”

The story starts back in the early nineteen seventies, when the Beeb decided that it required a compact speaker for its outside broadcast vans. This prompted new work in the corporation’s Research Department, under the stewardship of H.D. (Dudley) Harwood at Kingswood Warren. A team led by T.E. Sommerville and D.E. Shorter had been undertaking research into acoustic scaling, and come up with a quarter-scale monitor. The legend goes that it was thought to have good performance down to 100Hz, despite only having been designed to reach 400Hz, for speech-related purposes. The team found it worked surprisingly effectively with music programme material, especially when wall-mounted. This speaker was dubbed the LS3/5, and found its way into mobile TV control rooms for producers to monitor mixing desk output.

Then, shortly before the BBC was about to issue licences to a number of companies – as well as the BBC’s own Equipment Department – to manufacture it, the drive unit supplier changed some characteristics of the mid/bass driver, and the speaker had to be carefully reworked. When this was finally done, it was renamed LS3/5a and commercial production licences were finally granted to a number of British loudspeaker companies.

This famous little loudspeaker is a a two-way infinite baffle design using a specially selected KEF B110 Bextrene mid/bass driver and KEF T27 SP1032 19mm mylar dome tweeter. The latter is fitted with a perforated metal grille which BBC engineers said, “has a small effect on the frequency response which is wholly beneficial as it raises the output somewhat at high frequencies”. Thick strips of felt surrounded the tweeter to reduce secondary waves reflected by the cabinet edges.

The box itself measures just 304x190x160mm and is extremely carefully constructed and damped. The cabinet walls are 12mm birch plywood, braced on every joint with beech wood battens. Lots of work went into its design, to the point that different types of hardwoods were auditioned for the bracing. For example, one nineteen seventies report states that BBC engineers found Pirana Pine to have clearly audible colouration due to it resonating with the bass driver chassis, and so was rejected. The cabinet walls received a layer of Bostik sound deadening panelling, and a layer of 16mm anechoic-grade foam went on the sides, along with two layers of deadening pads and a 25mm layer of foam. The result was a heavy, highly acoustically inert box.

The crossover was unusually complex for a small loudspeaker, using no less than twenty six elements. One of the reasons for this was that the speaker was designed to work optimally with a wide variety of drive unit samples. In the event of a tweeter blowing, the service engineer would measure the replacement unit and select the appropriate tap position on the autotransformer to give optimal frequency response. The crossover itself is mounted behind the tweeter and damped by a thick felt pad to prevent resonance. “It was this elaborate crossover network, done very carefully and very skilfully, that gave a much better sounding speaker than those that didn’t,” says Philip Swift.

Interestingly, construction techniques varied from manufacturer to manufacturer, with Audiomaster pulling each crossover component tight onto the board to prevent resonance, while Rogers used the long legs of the components to keep them away from the board, for example. Even the grille cloth was carefully specified to be in contact with the felt stripes around the tweeter or there would be a frequency response anomaly.

The BBC’s Equipment Department manufactured small numbers of LS3/5as for reference purposes, to maintain quality control with outside suppliers. Legend has it that each licensee would keep a BBC-built pair of speakers to use as a production reference; an official production test schedule required these to be compared to the licensee’s production run speaker using high quality tape recordings of a variety of programme material. Quality control was rigorous, with a number of companies applying for licences and being rejected.

As it transpired, the first two manufacturers were Rogers and Chartwell, then Harbeth (the company formed by Dudley Harwood on leaving the Beeb) and Spendor (formed by Spencer Hughes, chief engineer of the BBC’s acoustic scaling speaker project) followed. Then other licensees followed, including Audiomaster (whose designer Robin Marshall later founded Epos), and RAM, Goodmans and KEF. More recently, other manufacturers such as Stirling Broadcast have embarked on LS3/5a production, too. The first LS3/5a bore the Rogers brand and was released in 1975, needless to say it’s now a collector’s item!

With a wide range of companies making the LS3/5a, myths soon began to circulate about one brand being better built and/or sounding superior to another. A surprisingly wide price differential didn’t help this state of affairs, either. Some believe Rogers made the best versions, because the company was first to market, for example. It’s certainly true that there were minor component variations – Rogers bought in their chokes and Chartwell wound their own – but again things have been overstated. For a good part of the nineteen seventies, Rogers and Chartwell Electro Acoustic Ltd. were both owned by Swisstone Electronics, and the speakers were reportedly made on the same line – which rather contradicts some accounts! In truth, the LS3/5a was very closely specified and highly toleranced, so there will be a high degree of uniformity across manufacturers.

In 1988 the little box got the first of two updates, with the mid/bass unit getting a more lossy vinyl material in its surround compared to the neoprene previously specified. The crossover was also tweaked to bring the frequency response a little closer to the original target, and also to make the speaker fractionally easier to drive. The speaker was no longer specified at 15 ohms – quoted impedance became nominally 11. Subsequently biwiring was introduced, bringing the LS3/5a into the modern era.

Some think the LS3/5a has a sublime and unique sound that has never been bettered, others believe it to be an outdated anachronism, limited by its ancient drive units with their low-tech cone materials. What is agreed is that the 83dB sensitivity of the speaker makes it essential to use a powerful solid-state amplifier – around 50W RMS per channel at the very least. The LS3/5as also works best on frame stands – such as those made for the Linn Kan – very close to a rear wall.

Properly set up and with good partnering equipment, this speaker does sound very smooth and well balanced. There’s a dramatic lack of boxiness to them that lets you listen right into the sound. However, they have a very small scale by the standards of most speakers, and there’s a sense that you’re peering through a rather compact looking glass. Bass is surprisingly enjoyable for a speaker than almost has none(!), being tight and clearly delineated. The midband is most pleasing in its clarity and neutrality, and the treble is smooth and delicate although not very extended.

The LS3/5a privileges some types of music over others. It’s happiest with light acoustic and small scale classical, where its fine tone and subtlety shines through, but put some crunching heavy metal on and the lack of bass extension, compressed dynamics (especially at higher volumes) and unatmospheric high treble is obvious. Its problem is that it just can’t shift air like big speakers, and goes to pieces when required to.

Spendor’s Philip Swift agrees, saying “it is not as realistic as other BBC monitors, lacking the clarity and scale of sound, but was still a very decent sounding speaker for its day.” Sadly though its day soon passed. Spendor still has original documents from the company’s founder Spencer Hughes, who was involved with the original design, saying that, “the advent of pop music will lead to a requirement for speakers that can take more power”. So, best think of this speaker as a specialised product that does a few things extremely well and others not quite so adeptly…

In the late nineteen seventies, Jim Rogers produced the JR149, using the same drivers as the LS3/5a in a cylindrical aluminium housing. Aside from looking radical, the round enclosure is more rigid and holds fewer standing waves, making for a better sound. As a key manufacturer of the speaker, Spendor has also done several revisions, such as the S3/5se. The original nineteen seventies Spendor SA1 was a direct rival and the company’s brand new D1 is its spiritual successor, says Philip Swift. In the nineteen nineties, Harbeth re-engineered the speaker to produce the HL-P3ES, which sounds similar but is again a better all rounder.

The LS3/5a itself got just two major changes over the course of its long life, the first being when it became 11 ohms instead of 15, and the second when it was made biwirable. Aficionados have strong views about the relative merits of both. Rogers’ matching stand/subwoofer – the AB1 – came along in 1995 and transformed the baby box into a far more useable loudspeaker. More recently however, the little speaker has been resurrected by Stirling Broadcast which has been granted a licence to my the LS3/5a V2. This uses Stirling’s own drivers, now that KEF’s are no longer available, but is said to retain the authentic BBC sound.

Even if it’s not the best, the BBC LS3/5a is surely the most successful serious small loudspeaker of all time. Up to 1988, over 60,000 pairs were made, with around 43,000 by Rogers. And after a period of inactivity, the wee box is back in production again via Stirling Broadcast. Such large numbers mean they’re relatively plentiful secondhand, but the cult status of this speaker has pushed prices up of late – expect to pay between £500 and £1,200 depending on age, type and condition; £800 should get you a very nice, useable pair which if looked after is unlikely to ever depreciate.