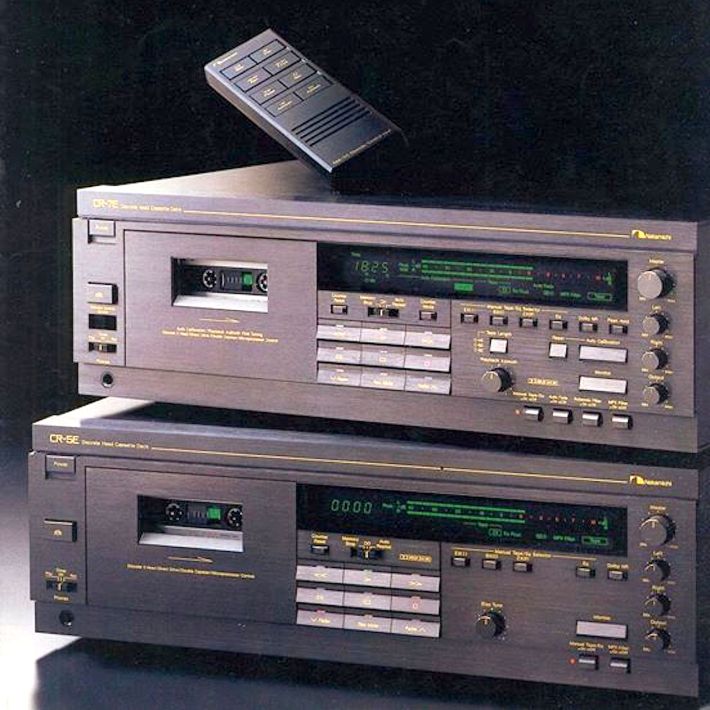 Compact Cassette, launched back in 1963, is not famous for being a respectable high fidelity music carrier. Thanks to its low (1 7/8 ips) tape speed and tiny track width, it never wowed the world with shimmering sonics, although the buying public still took to it in droves thanks to its hitherto unparalleled convenience – so much so that in 1988 it became Britain’s best selling pre-recorded music carrier. There was however, one exception to the rule – Nakamichi. This company more or less single-handedly made the format a serious, audiophile music carrier, and left the rest of the world to play catch up. As far back as 1972, it was making Compact Cassette recorders that could equal many open reel machines…

Nakamichi Corporation was founded in Japan in 1948, and was the brainchild of Etsuro Nakamichi, a tape magnetics research engineer whose dream was to design superior quality reproduction equipment. Although it first started manufacturing radios, tonearms and loudspeakers, Etsuro was fascinated with the idea of reproduced sound through tape, and in 1951 started making open reel decks for other hi-fi brands. Throughout the fifties Etsuro continued his development work, and in 1957 a breakthrough occurred when he made a superior tape head with reproduction capabilities from 20Hz to 20kHz. During the nineteen sixties, Nakamichi made both open reel and cassette decks, but it wasn’t until 1972 that the first Nakamichi branded cassette deck was launched. The 1000 was also the world’s first three-head deck, and it was this – along with the beautiful 700 – which was instrumental in elevating cassette to become a serious music medium.

In Britain, it took a long time for Nakamichi to gain its reputation for excellence, and even then it was solely down to the cassette decks; the turntables and electronics rarely got a look in, despite being of superlative quality. By the early eighties, a Nakamichi cassette deck was a badge of excellence for any serious British sound system, sitting proudly next to the Linn turntable and Revox open reel. Around this time, Bowers & Wilkins made an agreement with Nakamichi to distribute its loudspeakers in Japan. As a result, B&W’s John Bowers quickly built up a friendship with company president Niro Nakamichi, and the following year there was a reciprocal arrangement for their decks to be sold in the UK. A joint-venture company – Nakamichi B&W UK Ltd – was established, with Niro and Osamu Nakamichi as the Japanese directors, and John Bowers and Paul Wilkins as the UK directors. John Bowers had always thought the cassette decks to be special. As Paul Wilkins, Managing Director of Bowers & Wilkins Ltd, told me, “he had used Nakamichi decks while he was designing the first B&W loudspeakers.”

“The cassette decks were built with a design philosophy of performance first, convenience second,” he adds, “hence sonic performance was always put first and this resulted in design features such as discrete three-head technology – three heads that are physically, electrically and magnetically independent allowing accurate individual alignment for optimum results. These were combined with Nakamichi’s dual capstan “asymmetrical diffused resonance transport” which offered excellent speed stability whilst minimising head-to-tape contact irregularities. To improve this further, a pad lifter was fitted to the play head to push the cassette tape pressure pad off the head, thus reducing “scrape flutter”, and allowing the transport to control tape tension and head-to-tape contact.”

Careful attention was paid to the electronics, too. Individual adjustment of left and right channels for both record and bias levels for all three tape positions was possible, with switchable EQ and Dolby B-C on the later models. This resulted in exceptional frequency response, headroom and distortion figures and overall sonic performance with the minimum use of signal processing (Nakamichi never used HX-PRO or Dolby-S). You can then understand what sets Nakamichi cassette decks apart from their rivals. No bells and whistles; just sound design and engineering.

There has been much debate about the ultimate Nakamichi deck. Some people will contend that one of the early computing decks, the 1000ZXL in its huge wooden cabinet was the best; certainly it is the most complicated. But in the end, for sound quality it comes down to a straight choice between the Dragon and CR-7. There were a couple of turntables such as the Dragon-CT, but these never had the same appeal as the cassette decks and very few were sold in the UK. It did have some success with amplifiers and, indeed, later on with CD Players, but it was definitely the decks which made Nakamichi the legendary name it has become today.

“Quality variation was never an issue. Towards the end, the high labour costs made it impossible to produce some of the budget models in Japan, and production was transferred to Malaysia and Singapore. But these were proper Nakamichi factories, supervised by engineers sent from Japan, and this ensured that the quality was maintained. Actually, the only quality problems we found were with some of the cheaper CD Players, where the soldering was not so precise. 1996 was the last year of production of the DR-Series, and then things went quiet for a while. There was a brief reincarnation in 1999 in the form of the DR-8 and DR-10, but this only lasted for about eighteen months. No cassette decks have been built since.”

Only Nakamichi knows why it stopped production when it did, but Niro moved to California to concentrate on developing computer-related technology, and the company seemed to lose interest in the audio market. “As a result, demand for second-hand Dragons and CR-7s has never been higher,” says Paul Wilkins. “The Dragon is, of course, the most famous cassette deck ever produced, and may get the purist’s vote, probably because it offers you more flexibility with its manual calibration system, bi-directional transport and auto-azimuth correction. But my own personal favourite has to be the CR-7, because of it’s auto-calibration system, playback azimuth control, real-time counter, wireless remote control and overall sonic performance.”

Because of the link between Nakamichi and B&W loudspeakers in Japan, the original Bowers & Wilkins retail shop (from where B&W loudspeakers sprang from) took over the spares and servicing in the UK for what is thought to be around 130,000 Nakamichi cassette decks sold in the UK over a twenty five year period. It’s important to remember that they have a lot of moving parts, which rely on very careful alignment to fine tolerances to give acceptable (let alone excellent) performance. Bowers & Wilkins service manager Steve Pawson told me, “Most of the problems are caused by motors failing, or belts and rollers becoming worn. This causes the transport functions to become erratic or stop altogether, but this is a problem with all decks, not just Nakamichi! Also, decks can drift out of alignment over a period of years and this can cause deterioration in the quality of the music being recorded.”

In 2015, the cassette revival is finally beginning to take shape and of course Nakamichis are high on people’s shopping lists. Bowers & Wilkins can still service them but new parts are now becoming scarce, so prospective purchasers shouldn’t spend large amounts of money on a restoration project only to find that spares are no longer available. Even the less expensive decks are lovely pieces of history, and give excellent service if you can find a good one. Cassette fans know that there will never be another brand like this.