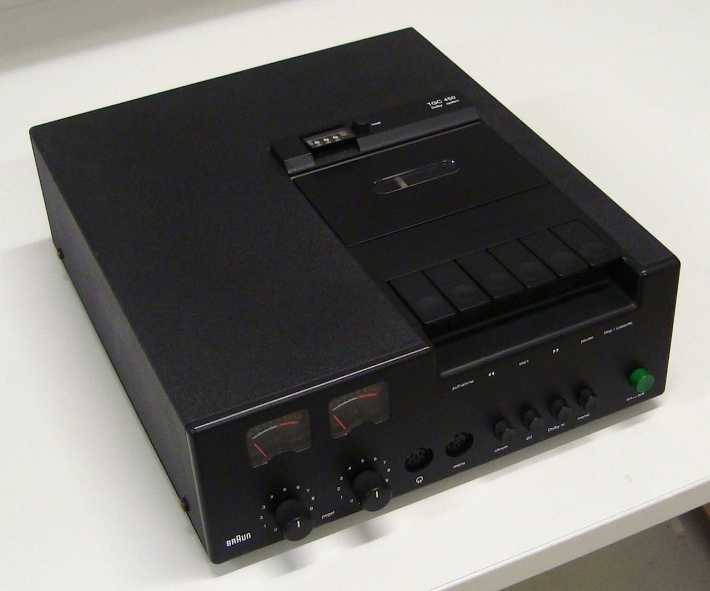 The exact moment that Compact Cassette came of age can be endlessly debated, but it would be easy to make the case for it being around 1975. At this time a number of key factors came together: the standardisation of chrome tapes and the Dolby noise reduction system, the entry into the market by almost all of the serious manufacturers and the general raising of performance and reliability to the point where most listeners found nothing really to complain about. With the technical problems largely solved the designers were now free address another issue: what the decks looked like.

Up until this point the average domestic cassette deck looked a mess, with knobs, keys and levers scattered about with regard only for mechanical and electronic convenience. Unconvincing plastic wood appliqué and garish metal trim liberally applied were the order of the day, along with clashing textures, surface finishes and legends. Part of the problem was that most decks came from Japan, a culture then still learning the subtleties of international industrial design.

Luckily some firms had a more enlightened view. Yamaha hired Italian designer Mario Bellini to style its famous TC-800GL, Sonab put the Nakamichi 500 into a much prettier box and Braun, with the help of Aiwa, made its cassette deck debut with the TGC 450. Aiwa had been involved with a big German name before, supplying BASF with their 8100 and 8200 hi-fi decks as well as a range of range of mono portables. Along with Aiwa’s leadership in cassette technology, Braun’s other trump card was its celebrity designer Dieter Rams. It was Rams that gave Braun products their signature clean industrial look, starting in the late 1950s with some striking “white box designs. The TGC 450 was the only Braun cassette deck which had Rams as a single named designer.

Compact and deeper than it is wide, the TGC 450 was intended to match Braun’s range of receivers, although would work with any other system built to DIN standards. Clean of line and shorn of superfluous adornment, the deck adhered to its creator’s philosophy of keeping ‘visual noise’ to a minimum. That’s not to say it’s bereft of technical refinements, the transport featured electronic automatic stop in all modes and a memory counter whilst in the signal processing sections both the Dolby B and the Philips DNL noise reduction systems were fitted. Chrome or Ferric tape could be used and stereo recordings could be made from an external microphone. A clever tilting prism allowed the tape counter to be viewed from any angle. Braun’s green power switch completed the look.

Seeing it now, the TGC 450 looks as much a prop from a stylish Cold War thriller as it does a piece of hi-fi equipment. Initially less striking than Bellini’s wonder wedge, the design nevertheless remains attractive, purposeful and neat. Designed for static use and mains operation only, it is less compromised in some respects than the TC-800GL and considerably more durable, the camera finish metal cover being much tougher than Yamaha’s fragile Nextel type covering. The controls are big and almost toy-like but correctly proportioned and work well. The rather small recording level meters and the lack of a level control for the headphone socket are the only ergonomic flaws.

Sound quality is impressive for a machine of this era; the powerful synchronous AC motor and the oversize flywheel provide a stable sound that is brisk and well timed. The top end is perhaps a little over equalised but this is common trait of any deck of this generation; engineers had to work hard to get good results from the basic types of head that were then available. Recordings made on newer recorders can sound dull with the Dolby in but DNL makes a good substitute, killing the hiss between tracks but leaving the treble reasonably bright when the music is playing. Like the BASF 8200 (which has certain technical similarities), the Braun is set up for BASF LH ferric and CR chrome tapes. Since the latter are no longer available it makes sense to stick with ferric for recording; TDK D or AD are a good match for the later versions of LH. Good results can be expected if you keep the small VU meters on the white side of the scale, only a slight hiss at low levels and a bit of treble muddle at high ones detract from the TGC 450’s competence.

Most examples will need mechanical attention by now, new belts and the re-lubrication of the key sliding and rotating parts normally being sufficient. The head is permalloy and therefore subject to wear, although it is longer lasting than some that were used at this time. The input sensitivity matches DIN equipment but the microphone socket on the front has an attenuated connection for line level sources, meaning that all is not lost if you want to make recordings from a CD player (etc) without having to use a DIN standard amplifier. There are no integrated circuits in the machine so it should be possible to repair most electronic faults. The equivalent Aiwa and BASF machines of this era are of nominal value only, but Braun’s designer cachet means that a decent TGC 450 may cost you between £100 and £200, possibly more for a pristine example. Most were sold in Germany, so that’s a good place to start looking for one now. TJ