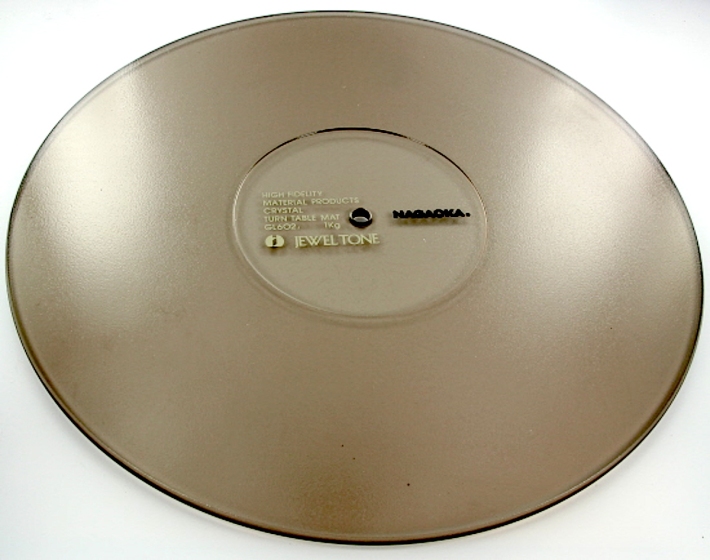 The late nineteen seventies saw fierce competition amongst turntable manufacturers – especially in Japan. The UK market missed much of this, thanks to the reign of the Linn LP12 which seemed to be most hi-fi dealers’ – and magazines’ – idea of the ultimate way to play vinyl. Yet beyond our little islands, the race was on for the best sound from the (then) world’s favourite music format…

One interesting spin-off from this was the vinyl accessories market. More than just the usual cartridges and tonearms, there was a vast world of small aftermarket components designed to replace standard-issue parts of turntables. Once again, this was particularly prolific in Japan, which as a society has a certain obsessive-compulsive approach to all its pursuits – you need only compare the factory option list for a new Honda car in Japan with the UK version to see that Japanese consumers demand vast choice!

Nagaoka was primarily a cartridge manufacturer, and a very good one at that. Like its arch rival Audio-technica, it also did a very popular sideline in accessories, all of which were high quality yet reasonably priced. The GL602 was part of this – a glass crystal turntable mat designed to replace the standard issue thin rubber items supplied with the vast majority of record decks on sale.As you would expect from a premium product, it was extremely well made and presented – and many vinylistas thought it well worth the not inconsiderable £50 asking price.

The mat is made of what Nagaoka describes as a ‘special tempered glass’, with ‘a special hard coating for Q damping’. It weighs 1kg, which is just about right – any more will start to overload the motors and/or bearings of some turntables, and can over-work the servos on quartz-locked direct drives, throwing noise into the deck. Much less, and you lose the advantage of the added ‘flywheel effect’. It is 6mm high, which again means that you can just about get away with not adjusting the VTA of your tonearm, although purists will of course do so. The other diameter is 290mm, so the deck should fit most platters, including those with raised outer lips.

Tap the mat with your fingernail and there’s a slight ‘diiinttt’ sound; it’s way less lively that tapping a standard pane of glass of course, but not completely dead. Nagaoka interestingly published a waterfall plot in the instruction manual showing similar first harmonic distortion to a standard rubber mat, but considerably lower second harmonic. The company says that the specific design of the mat and the treatment of the glass means that it will improve the sound because the record doesn’t vibrate on the mat as much as with a rubber mat, and also argues that the mat doesn’t deform in the centre, where most of the weight of the record ends up.

Yes, it really does work! In truth, it depends rather a lot on the deck you’re using, but with a Technics SL-1200 it brings a smoother, crisper, more natural sound to the proceedings. It’s not dramatic, but there’s a sense that a layer of grain has been taken out and the effect is a more translucent window onto the recording. I can see why people would have invested in one at the time. These days, there are so many good aftermarket record mats around – using more advanced materials than those available in 1979 – that it’s more of a nice thing to have than a cost-effective upgrade. Nagaoka GL602s rarely surface, and this makes them valuable to collectors with some people paying £200 for a mint, boxed example with its little polymer record stabiliser. If you’re looking for a period accessory for your classic Japanese direct drive turntable though, it’s still worth seeking out.