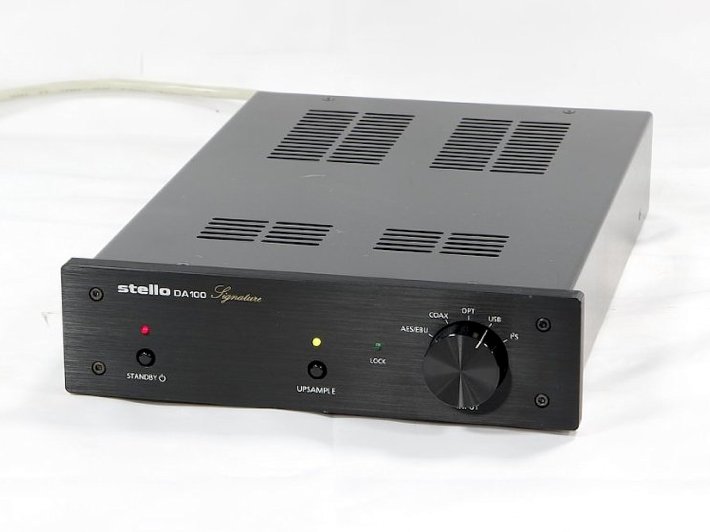 We’ve all heard of Samsung, LG, Kia and Hyundai now – South Korea is a growing South East Asian economic power with a thriving technology sector. It also has an audiophile scene too – and one of its greatest exponents is April Music. A quirky but fascinating company, it’s different to your average Japanese giant in that it specialises in ‘affordable audiophile’ products. Having met Managing Director Simon Lee and daughters EJ and Claudia a decade or so ago at the Las Vegas Consumer Electronics Show, I came away impressed by the fact that they were focusing on high performance, high value two-channel kit – sold under the Stello brand name.

The DA100 Signature DAC appeared in 2008 selling for £595, along with its matching T100 transport (£675). The latter was a rather nice little top loader, complete with a magnetic puck and smoked acrylic top cover. Both units are compact half-size designs (212x55x290mm, 3.5kg), so when sat next to one another look like a conventional full size CD player – you can of course site the T100 on top of the DA100, making a miniature hi-fi stack. The digital-to-analogue converter has RCA phono and balanced analogue outputs, and a USB digital input to go with its optical, coaxial and i2S connectors. Indeed, the Stello was one of the first products of its type to come equipped with USB, but the downside of this is that it’s pretty primitive. The dedicated USB DAC chip – a Burr-Brown PCM2704 – is not asynchronous, and runs only up 16-bit/48kHz resolution. The front panel has power on-off and input source selection, plus an upsample button which at the time conferred it with great prestige!

Via its S/PDIF inputs, the DA100 Signature is a true 24-bit, 192kHz upsampling design, said to have a jitter-free timing circuit and 6th-order digital filter, plus a fully discrete Class A analogue output stage which causes it to run surprisingly warm. The unit features 1% tolerance metal film resistors, WIMA polypropylene capacitors, Cardas RCA connectors, and Neutrik balanced connectors, plus an impressively sized (for a DAC) 25VA toroidal transformer, while the voltage regulation circuit has very low output impedance. Overall, it is tidily finished – not lavish in the Japanese high end sense, but crisp to the touch and solid all the same.

At the time of its launch, the DA100 Signature was – to my ears – the best DAC at the price, by a country mile. It was one of the first truly refined, clean and smooth designs to sell for under £1,000 or so. That’s not to say it was stunning, but it was certainly highly accomplished and still proves very listenable by modern standards. It’s detailed in a good way; it doesn’t spray information out at you, but rather hangs things together nicely inside a large stereo soundstage, letting you listen in to it. With upsampling switched off, it’s an enjoyably musical device with strong bass, a smooth treble, oodles of midband detail and a satisfyingly musical gait. Toggling on the oversampling via the front panel button brings a smoother, more spacious and airy treble, and this extends down to the midband, with a fine sense of perspective to the instruments in the mix. You also hear slightly greater dynamics and a sweeter, more natural tonality. Notes seem to stop and start more explicitly, and sound less blurred. In the bass, there’s a fraction more warmth, and a more natural, easy demeanour.

Overall then, this was – and still is – a great little DAC, one which sounds recognisably different to the current generation of budget designs, many of which sport the ESS Sabre chips which weren’t around at the time. It has real musical zeal yet is a consummately smooth and refined performer, unexpectedly so for its price. The only downside is the brilliance of the DACs that followed it – the Audiolab M-DAC that came four years later is a more detailed and commanding listen, although perhaps not quite as refined. These days, a few hundred pounds will get you this capable little digital converter. The only downside is that it doesn’t have an up-to-date USB input, so you can forget about state-of-the-art computer audio and/or DSD.