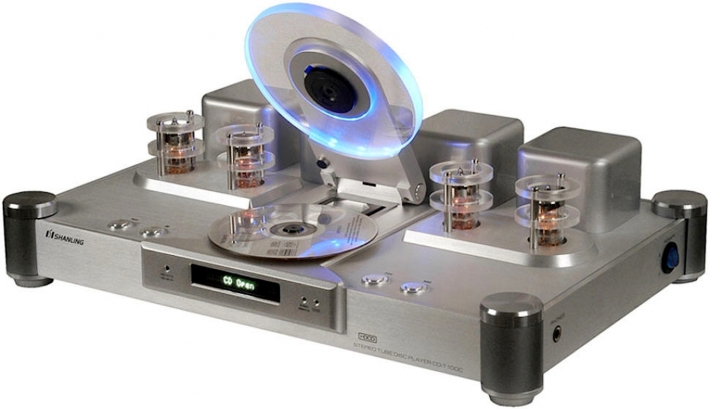 How we marvelled at this striking, post-modern design back when the new century was still young! Yet over a decade later, the 2003 SCD-T200C now looks positively vintage with its acres of silver brushed aluminium, blue LEDs, valves, perspex and silver painted steel. Way more visually interesting than the silver disc spinners coming out of Japan at that time, the Shanling was a refreshing change from the aesthetic rigour of the day. In truth, it’s actually a conventional Sony SACD player under the skin, and that’s no bad thing. It used the (then) latest Sony KWM-234AAA drive, but instead of the accompanying Sony CXD2752R SACD decoding chip there’s a proprietary Shanling one, said to have faster access times. Downstream of this is a Burr-Brown PCM1738 24-bit/192kHz DAC chip.

Behind the centrally mounted, top-loading disc transport sit a row of four tubes, and behind that four transformers. The disc transport cover is made of Perspex, and uplit by a cobalt blue light, while each valve has two circular Perspex discs around it, acting as a cage. The accent lighting throws across to these too, so when switched on, and used in low light, the Shanling glows even bluer than the inside of an early noughties Volkswagen Golf. On the front face of the machine is a Sony-derived fluorescent blue display, and two blue LEDs to denote CD or SACD operation. Some parts of the machine are picked out in gold, which looks tasteful, and the control buttons on the top front feel decent too. Compared to its closest rival of that period – Sony’s SCD-XA9000ES – it looks like a ‘skunkworks’ special project, which is to say interesting but ever so slightly ‘home made’. The Shanling is very much of its time then, and it’s only nearly fifteen years later that it’s beginning to get something of a distinctively ‘retro’ look.

It’s fun to use. There’s a lot to be said for top loading CD transports, and this one doesn’t look a million miles from the Michell CD transport that exists but which never got past the prototype stage (circa 1998). On either side of the transport, five metal buttons allow play/pause, stop, forward and backward track skip, and CD/SACD selection. These functions are all repeated, (along with various others) on the remote control, which is hewn from three bits of cast aluminium and looks (and feels) very nice indeed (unlike the Sony SCD-XA9000ES’s ‘festival of plastic’). There’s a high-quality volume control for those allergic to preamplifiers (a healthy disposition, judging by the state of most), and the right side panel sports a 6.3mm headphone jack, driven by the tube output stage, and a somewhat cheap looking power on-off switch.

Like too many products from China now and then, it is let down on the detailing though – the transport can be quite noisy with some discs, with lots of mechanical whirr from some CD-Rs. Also, when you enter the fast wind or rewind mode (if you pardon my tape recording parlance), it doesn’t drop the volume as per every Japanese player I’ve ever heard – which can be disconcerting. Also, the transport ‘lid’ isn’t damped – it feels more like a mousetrap than a CD player component when it bangs down on the top plate!

Sonically, it’s a mixed bag – but generally good. First, you’ve got a choice between ‘direct out’ and ‘tube out’, and these sound quite different. The former is crisp and clean and really rather explicit, whereas the tube out sounds warmer and more euphonic, as you’d expect. Essentially then, the Shanling gives you two players in one, and you can choose the type of coloration that you prefer – cool or warm. Through the direct output, the Shanling is a little brighter than the Sony SACD spinner on which it’s based. It’s fast, dramatic, upfront and powerful sounding, but certainly has a well lit upper midband which sound might find rather too tinselly. Bass isn’t the strongest around but is decently warm and stops and starts when it should. The midband serves up a wide soundstage, with lots of detail and a more three dimensional sound than you might expect. Move on up and you get a crisp treble with just a touch of brightness and a slick lack of finesse. This applies with both CD and SACD, but the latter certainly improves things quite noticeably – sounding very appealing indeed at the price.

The tube output stage gives an obviously softer sound; bass is less tight but slightly fuller, while the midband becomes fractionally more diffuse and marginally more expansive both left to right and front to back. Treble gets sweeter and gentler, and loses its slight ‘chrome-plated’ character. Musically, it smoothes out and seems to sacrifice a bit of rhythmic drive for a more immersive, lilting quality. Dynamically, it’s fractionally less accurate, with the edges rounded off the biggest transients, but again it’s not an unpleasant sensation and the fractionally fuller bass gives the music a more confident, authoritative feel. Via the tube outputs playing an SACD, the Shanling was a highly impressive sounding machine even at its two thousand pound price point.

When I reviewed it, the Shanling SCD-T200C seemed audaciously modern – a sort of vision of CD’s future in the metal. Now, just thirteen years later, it’s practically an antique. SACD is dead, and DSD now exists only on computer hard drives. CD is very much in the late autumn of its years, and this machine only plays these two formats because it doesn’t have any kind of DAC functionality. Amazing how times change, isn’t it? This machine is now available for a fraction of the price – £500 or less, on eBay. The good news is that the laser pickup is still freely available, and costs under £50, which makes it a fine secondhand buy should you wish to go back to the future of digital discs!