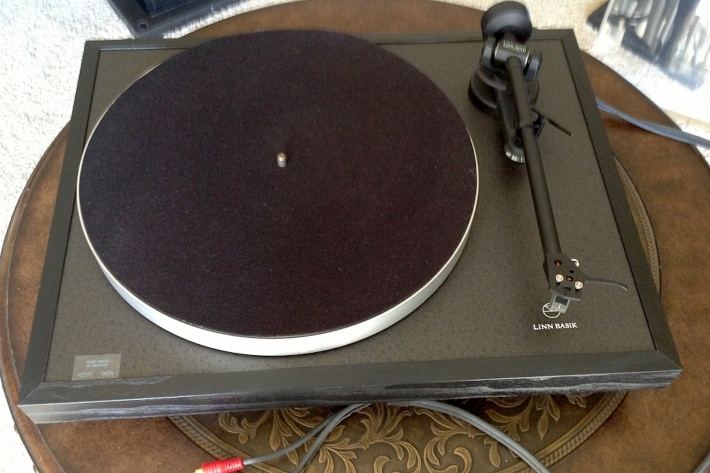 Back in the early nineties, Linn Products was still regarded primarily as a high end specialist turntable manufacturer. After all, its Karik/Numerik CD spinner had only been around for a couple of years, and the LK1/LK280 pre-power amplifier combo was far from being omnipresent. By contrast, the LP12 had been around for some twenty years, sold bucket loads and very few (in the UK at least) had even began to question its seemingly unassailable position as ‘the best turntable in the world’.

The Axis completed the Scottish company’s turntable portfolio. Launched in the late eighties at the very competitive £299 price point, thanks to the introduction of the Akito tonearm and Linn’s penchant for increasing its prices just a little faster than most, it had become quite a pricey deck in its own right. Together with the Sondek, it made Linn’s range of vinyl spinners very respectable.

Things were changing, however. There was a discernible move away from buying turntables as a primary source. Sondek sales continued solidly – the popularity of CD was hardly a threat to buyers who wanted ‘the best source money can buy’ – but the Axis seemed to be fading. The bottom end of the market was still reasonably buoyant, however. The success of Pro-Ject, and the ever-growing presence of Rega suggested that the decks that punters wanted to buy were either ‘cheap and cheerful’ or expensive and ecstatic.

It’s into this climate that the Basik turntable was born. Selling for under £350, it came as quite a shock to Linn fans who’d always assumed the company was exclusively a purveyor of ‘premium’ products. More surprising was the design of the thing. In some ways quite impressive, there were nevertheless some all-too-obvious compromises. Most shocking to Castlemilk traditionalists was the lack of suspension. Okay, so it had three rubber feet, but to those used to twiddling their LP12 springs on a cold winter’s eve, the Basik was to all intents and purposes running with no shoes or socks on, naked as the day it was born. In this respect it was just like a Rega or a basic Pro-ject or Dual – heaven forfend!

Cost cutting continued in other areas too. The plinth was quite elegant looking but very crude – basically just a bit of chipboard with a vinyl wrap. Whereas the Axis has seemed surprisingly well built for the price a few years earlier, this was a major step down. The motor was the same Philips Impex 24-pole AC synchronous affair seen on the Sondek and Axis, but this was hardly anything to shout about. Worse still, it was devoid of the fancy power supplies found on the Axis and LP12 Valhalla. The plinth was a decent enough two piece Mazak affair, pretty much as seen on the Axis, and the bearing was similar too.

This was all pretty unexciting stuff, but one big surprise came in the attractive shape of the Linn Akito tonearm fitted as standard. This wasn’t up to the standards of Rega’s RB300 in terms of detail and soundstaging, but was obviously more musical. It was also a resounding improvement on the rather sad LV-X Plus that had been the company’s entry level arm until then. So good was the Akito that, so the legend goes, it outperformed the very early Ittoks – which was no small feat. The result was that an Akito-equipped Basik could run an LVX-equipped Axis surprisingly close, despite the latter’s obvious extra sophistication. Needless to say that the Axis very soon got the Akito too!

The Basik sounds surprisingly better than the sum of its parts. A natural, organic record player, it lacks the coloration of the LP12 of that era and presents a tight, breezy and musical face to the world. Bass is its only obvious weakness, but there’s something you can do about that – wall mount it or place it atop several layers of isolation tables. Some folk use 18mm slabs of Medite separated by Foculpods, others have got great results from a half-inflated bicycle inner tube in-between. Just plonked on your hi-fi support however, it’s very much a poor relation to an LP12, or an Axis for that matter.

These days Basiks are still quite pricey, thanks to the new cost of the Akito tonearm going skywards. A decent specimen will now cost you upwards of £350 (including arm), but far less if someone has taken the Akito off. Fit an Audio Technica AT-95E and get a decent isolation platform and you’ll have an enjoyable way of listening to vinyl LPs for not very much money. It’s also refreshingly simple and unfussy to set up, and doesn’t go out of tune either, unlike its more complex bigger brothers.