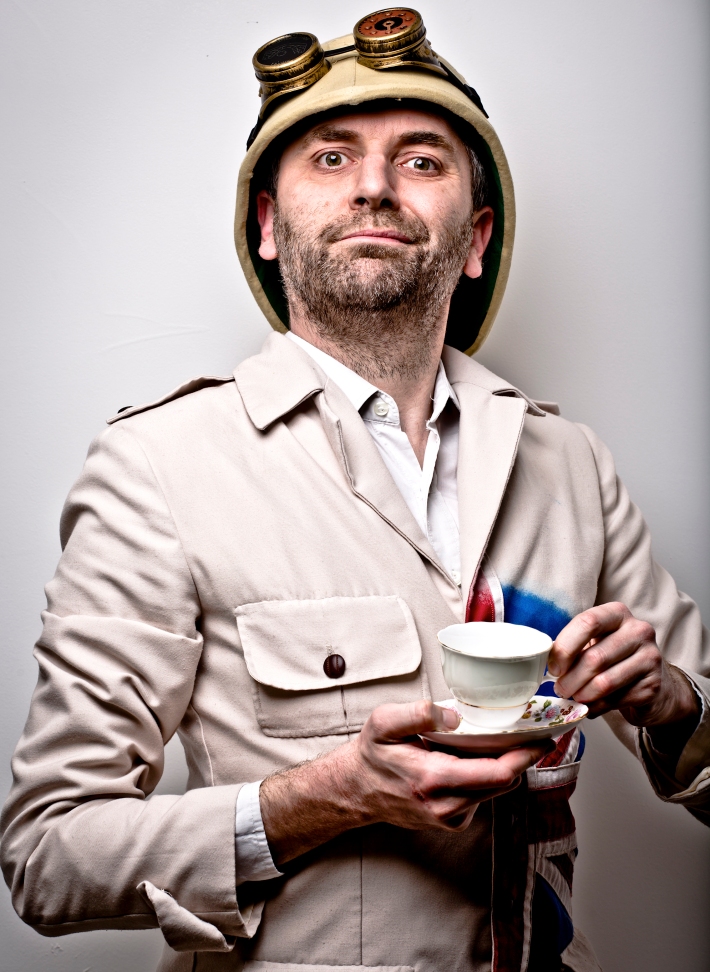 In the luxury of his opulent Brighton office, Professor Elemental is reclining on a sumptuously upholstered Edwardian chaise longue, Pith helmet to one side, cup of tea in hand. “Oh do come in”, he beckons. Within minutes, I am hearing the story of his early life. “I come from a little town called Ipswich, which is just the sort of place that one grows up wanting to escape from. So I did – I tunnelled my way to Brighton about fifteen years ago!” Does he regret it? “In a word, no. I spent most of my childhood digging the tunnel with whatever tools I was given and was delighted to finally get out.” So when he appeared, mole-like, from the soil, was Brighton as good as he had hoped? “Certainly not,” he retorts. “I was aiming for Hawaii…”

Professor Elemental has almost single-handedly made ‘chap-hop’ famous. It’s a weird and wonderful mix of catchy hip-hop tunes and rap done in a classically English accent. His songs brilliantly essay being British, with all its good sides and bad. Among many others, he has written an ode to tea (Cup of Brown Joy), an homage to good old fashioned pugilism (Fighting Trousers) and a tribute to his beloved pony (This Is My Horse). His most loved anthem – I’m British – attempts an explanation of his national identity. “I begin every sentence with an apology, sorry if that’s the case, that’s just British policy. It’s probably the case with everything in honesty, I use ten words when two would do, honestly.”

He comes over as a trifle eccentric, but – as the saying goes – you don’t have to be mad to work here, but it helps. Anywhere else, and he would stick out like a sore thumb, but in Brighton he is at home. “It is the perfect English seaside town, with its glorious Palace Pier with slightly cheesy rides, wedding parties, fish and chips, pulsating nightclub music, cake shops and killer seagulls. It has everything I like and dislike about Britain in one neat package.” The fun fair on Brighton’s pier brings him creative inspiration. “Many of my best ideas come to me after I have been going backwards on the merry-go-round at lunchtime. Either that or sitting by the ocean, which cleanses the mind and lets the silliness in. Not that I need any help because most of the time I have trouble keeping the silliness out. It’s been a nightmare getting that door closed again, I can tell you!”

When he’s not writing international chap-hop hit records, he spends his time thinking about science. “There are a lot of people in this country trying to make things which are ultimately pointless,” he declares, “and often they don’t work! My theory is that they don’t take enough tea and cake. My butler Geoffrey, who is an orangutang, helps me do scientific experiments but is useless. Never work with apes. I feel responsible for him though, because I took him out of his natural habitat… Ipswich.”

Does he think his music has touched people? “I’d like to think so, but not literally as there are so many of them! Actually, I have had everyone from five-year-olds to grandmothers coming up to me, and saying they like my songs. I love going on tour around the colonies, but I do find the tea is very variable. In America it has traditionally been terrible, which has given me the chance to to be smug – a favourite past time of English men abroad. In Canada the tea is far better, and they’re so polite and not the slightest bit sarcastic!”

Many regard the Professor to be a ‘steampunk’ – a popular subculture inspired by Victorian science fiction such as HG Wells and Jules Verne. Fans wear elaborate costumes and accessories such as goggles and telescopes, and dress up like characters from an imaginary nineteenth century past. “Steampunk is different wherever I go. At my concerts in France, the fans are impossibly good looking, dance well and smoke a lot. In Sweden they don’t indulge in small talk but have superlative style. In America they’re very excitable, generous and carry big guns. In England, many steampunks just use it as an excuse to get drunk in a fancy hat.”

One day, Professor Elemental would love to play in China. He doesn’t know much about the music scene in Beijing or Shanghai, but thinks that any country that takes tea so seriously has got to be “jolly nice”. For the past few years, he has been expecting to be honoured by the British government for his work as a cultural ambassador, but believes the letter must have got lost in the post. “Do you know what, I am still bloody waiting! If I couldn’t have in a knighthood I would accept a medal, or even a small trinket”, he tells me.

One of his closest encounters with fame came a couple of years ago, when a senior British government minister declared his love for Professor Elemental’s music, and chap-hop in general. “Well, I have great responsibility to push the boundaries of taste and mad science wherever possible,” he admits. “You can never have too much of a good thing. That’s why I drink the equivalent of a shallow bath full of tea every morning.”