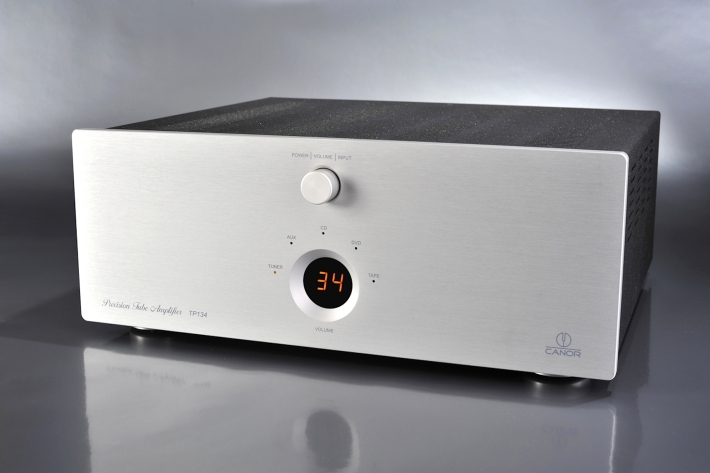 This £2,495 Hungarian-made integrated is a serious attempt by a niche manufacturer to produce an affordable, decent sounding valve amplifier. It’s an EL34 pentode-based integrated design that’s said to work in full Class A mode up to about 10 watts, going on to deliver a quoted 35W per side. Four smaller 12AT7 (ECC81) tubes take care of the input stage driving duties. The company has attempted to refine the build process rather more than many Chinese designs, with custom milled printed circuitboards claimed to give the sonic purity of wire-to-wire connections but on a mass production scale.

Here we see signs of Canor trying to ‘civilise’ the breed; everything from locating the valves inside a standard sized, well ventilated case (435x170x390mm, 22.5kg) which is a far safer alternative to having the glassware exposed, especially if you have children or pets) to the fitment of a relay attenuator rather than a bog-standard volume pot (giving 1dB increments and 63dB minimum attenuation, with just 0.05dB channel matching error). The power supply has had a bit of thought go into it, with primary and secondary windings separated by double shielded grounded copper foil to lower noise. The tube anode voltage is filtered by high value capacitors, and additional tube shielding is used inside to give a claimed 6dB improvement in crosstalk. The output transformers have several bifilar windings lined up in sections to maximise power bandwidth, and in the signal path Canor uses only high-quality Mundorf polypropylene capacitors.

Just as Canor has fought hard to modernise things from a construction point of view, it has also put more than a little effort into the user experience. Instead of a fascia full of clumsy, ill fitting knobs and buttons, the TP134 has a single control controller which turns the unit on an off with a long, firm push, selects source sequentially with a short push and also rotates left or right to work as a conventional volume control. This is done in conjunction with an attractive orange LED display showing level in -dB, and a cluster of source LEDs around it. And just to make things even more swish, the amplifier has a soft-start feature; which means the glass bottles get gently powered up on switch on, during which time a segment of the main display pulses slowly. The overall user experience is really nice then, and the sturdy, well finished casework only improves the mood further.

Since the EL34 first surfaced in the early nineteen fifties, it has proved a popular power valve – first in famous hi-fi products like Leak’s TL25 and Stereo 60, and latterly in a wide range of modern guitar amps. So the warm, expansive sound of the TP134 is easily recognisable, although for better and for worse this Canor sounds like no contemporary solid-state design. It serves up a larger-than-life sound with a thick, crunchy bass and a full, well-upholstered midband that’s rich and bold, plus a sugary but not terribly spacious treble. In short, this whole amplifier is like one gigantic effects unit (which is of course why axe-wielding rockers love their EL34 guitar amps), but I mean this in a positive sense.

For example, cue up some slick, slack modern soul such as 4hero’s Our Own Place and you’re greeted by a vast ‘wall of sound’ inside which the midband assumes an almost supernatural importance. By this I don’t mean it is tonally mid-forward; nowhere on the frequency spectrum could this amp could ever be accused of such recklessness. Rather, it just seems to draw the listener further into the middle octaves of the music, whereupon he or she encounters a world of wonder. Female vocals seem to have a magical directness and delicacy, snare drums feel like they’re being played especially for you and pianos and strings drip with vast swathes of sparkling harmonics, giving them a gloriously ethereal quality. Above this, ride cymbals ring like bells in the night.

This isn’t strictly accurate of course, yet it induces the same sort of wide-eyed glee in the listener as really being there at a live gig. And suddenly you find yourself attracted to more rarefied musical pleasures, that have hitherto left you cold. Talking Heads’ Naive Melody proved a great showcase for the subtlety of the Canor. It set up a big, fat, thumping groove with a stonking bass drum and fat snare sound, and in front of this was a huge playground where this amplifier had selfish fun. It was great at conveying the scratchy rhythm guitar and squelchy analogue synths of Chris Franz and Tina Weymouth, while David Byrne’s vocals came over as a kind of deranged Bryan Ferry, giving the track a haunting, ghostly feel.

In absolute terms, bass is a little loose and lumpy, although it soldiers on to surprisingly high levels via the relatively easily driven Spendor D7 loudspeakers I used for the review. Give the TP134 a sterner speaker load though and even via the four ohm tap it starts huffing and puffing, reminding you it isn’t a hundred watt solid-stater after all. Even with benign boxes, at high volumes EL34s tend to compress things – albeit euphonically – and this began to happen just as my roof started parting company with the listening room walls. Again, this is something that you wouldn’t get with a chunky transistor amp, even if the sound hardened up.

With its lack of clinical transparency, classical music should be where the Canor stumbles and falls, but surprisingly it doesn’t. It’s quite true to say that it doesn’t have that glass-clear midband you get from the best Class A solid-staters, but somehow it still worked magic and had me enraptured with a DG recording of Beethoven’s Pastoral Symphony. The TP134 doesn’t quite get the very first few nanoseconds of a note, and is prone to delay or even slur its decay slightly, but is still so good at communicating the essential rhythm and subtle dynamic phrasing of an instrument that you just don’t care. Not only this, it strings everything together into one large magical morass of sound that is wonderful to behold. Its sins of omission and obfuscation are plain then, but still this heroic Hungarian charms your very socks off, and its faults just don’t seem to matter.

Whatever music you throw at it, from the crashing power chords of Nick Lowe’s So It Goes to the stark, sparse, minimalist soundscapes of Kraftwerk’s Tour de France Etape 3, this amplifier provides a larger-than-life sound. Often more surreal than real, it is still never less than blissful to listen to. But let’s be clear, not every listener will appreciate its coloured, tubby, compressed nature – or its soundstaging where everything gets pumped up to twice its natural size and fired right out at you. One to audition then, in some ways a great buy at the price which will bring you a musical life less ordinary – providing of course you like it like that.