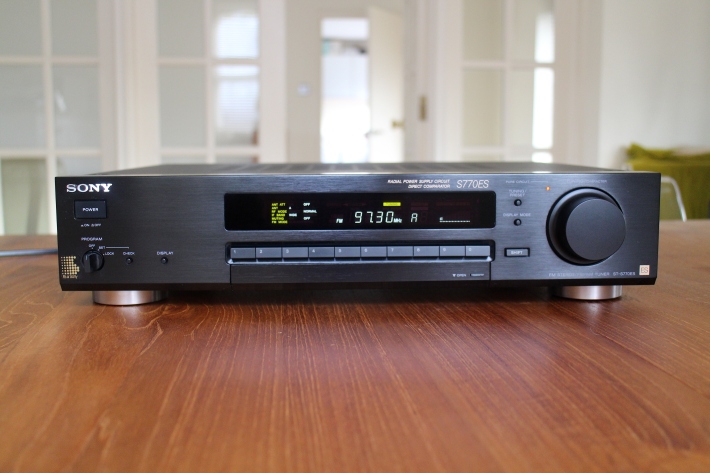 Back in 1991 Sony Corporation was Japan’s best-known purveyor of premium priced electronics – from Trinitron televisions and MiniDisc recorders to portable video cameras and CD players. Basically, if you wanted a ‘good’ TV or hi-fi, you could save yourself the bother of shopping around and just go and buy a Sony, which was bound to be well above average, if not always the absolute best. Rather like BMW cars or SMEG fridges, the brand itself was a seal of quality – as well as a badge of good taste. The £300 ST-S770ES was Sony’s top hi-fi tuner, so there was no way it wasn’t going to be good.

Top of the company’s premium ES range (above the five- and three-hundred series), it offered excellent build quality and thoroughbred engineering in a largish (430x95x372mm, 5.8kg) package. By way of example, although the RDS (Radio Data System) had been around for a couple of years, the ST-770ES didn’t have it fitted, whereas the cheaper tuners in the range did. Why? Because Sony engineers couldn’t make the unit sound as good as they wanted with an RDS chip inside, so they just left it out. In other words, ir was designed to offer superb sound above everything else – but being Japanese, this didn’t mean that most luxuries befitting a top tuner were denied.
Indeed, the ST-S770ES had a display that lit up like a Christmas tree; this was no minimalist Naim NAT-01. Actually, it was a sophisticated and complex design, complete with a bank of thirty FM and AM presets which not only stored the frequency, but also allowed the user to assign a user-input name (it had no RDS, remember) as well as remembering a host of different settings unique to that preset. These included the choice of radio aerial being used (two FM inputs were available), the attenuation level of the aerial, the IF band, whether station muting was needed and also the FM mode (mono, stereo or hi-blend). In other words, the ST-S770ES offered a wide range of configurations all instantly changeable at the press of a single preset button.

In 2016, this might appear a tad prosaic. After all, so many of these problems have been solved by streaming radio from the internet now, haven’t they? But at the time, FM/AM tuners were the only way you could get radio and to have this choice was a boon. The aerial selector switch was particularly special, because you could point two different FM twigs in two different directions to maximise the number of stations it would pick up. There were very few other tuners on the market that offered this, so it marked the Sony out as special.

This wouldn’t have been such a big deal if this tuner sounded poor – but actually the Sony was one of the best performing designs of its day. Factor in its wide functionality, and that’s what makes it so special – it was jack of all trades and master of many. Whether it was FM, MW or LW you were listening to, the 770ES performed just that little bit better than any ‘normal’ hi-fi tuner. And then you’d do a double take, and wonder why that London FM station was coming through with such clarity, sixty miles from the capital. The answer was that it had a superb RF front end, with excellent sensitivity (Sony quoted 0.9uV with a 75 ohm aerial, IHF weighted) which was way better than anything its rivals had to offer. Even with one of those ‘wet piece of string’ internal ribbon aerials, the Sony pulled in FM stations like they were going out of fashion.

It’s one thing having a sensitive RF front end, but what happens it if grabs too many stations, and they bleed all over one another? In central London this is a real problem, but again the Sony’s selectivity was superb (Sony quoted 80dB in Wide mode at 400kHz, and 90dB in Narrow). In other words, it could sift through the crowded FM dial, lock on to a specific station and cling to it, regardless of what else was going on nearby, and/or the atmospheric conditions. This brought a sense of grace to the increasingly crowded nineteen nineties FM dial – something which other tuners could only dream of. And once locked on station, the Sony was breathtakingly quiet with a quoted signal-to-noise ratio of 86dB (stereo).

If you weren’t minded to tune in via your already chosen presets, then you could of course do it manually. Although in 2016 the Sony’s large rotary tuning wheel doesn’t seem anything special, in 1991 when the 770ES launched, having a large knob to spin through the stations was a pleasure last experienced in the late nineteen seventies. Lest we forget, almost all eighties tuners had ‘up/down’ push buttons, which were hardly the most intuitive of things to use. Once again though, this Sony distinguished itself – with a variable muting that adjusted itself to the rotation speed of the knob, which gives a very ‘analogue-like’ feel. Even more cleverly, while the station is tuned by a phase-locked loop IC, when it has locked on the signal the clock oscillator of the microprocessor switches off. As Sony said, “the received signal passes only through analogue circuits” – reducing interference, and the noise floor with it.

This tuner offers the best of both worlds then – a sophisticated computer controlled digital tuning system which switches itself off after the tuning has been done, allowing the high quality analogue tuner to shine through. On initial set-up, you’ll need to spend a good few minutes configuring the presets (the title, and the settings), but this done the Sony proves extremely easy to use henceforth. The unit is well made and finished, if not quite up to the top Sony ‘battleship’ standards, has a silky manual tuning action and is utterly fuss-free if you eschew this and live by presets as most users invariably do.

Locked on station, the Sony turns in an extremely stable and eerily hiss-free sound. It is remarkable not just for its ease of pulling in distant FM stations but also for the quiet background. With a good roof mounted antenna you’d find it easy to confuse it with a digital source for example, such is its quietness and stability. Yet the ST-S770ES sounds better than most CD players when listening to a good BBC Radio 3 live broadcast. One immediately begins to marvel at the sheer authority and subtlety of the sound.

The obvious standout feature is its bass. Zip over to Radio 2 and there it is, in all its glory. The Sony seems to go down a little deeper than most FM tuners, but more remarkably, has a far weightier bottom end than almost everything this side of a Magnum Dynalab. It’s clear to hear on Coldplay’s Speed of Sound for example; the 770ES sounds unexpectedly strong and assured compared to nearly all other FM radios. The music has a natural flow and a liquidity to it and the midband is remarkably lacking in grain, noise and other nasties. Indeed, it has an eerie ability to sound like you’re listening to lots of different musicians playing in a studio together, rather than the amorphous blob of sound you get from most tuners.

Treble is special in two respects; first, the layer of hiss that you’d normally expect from stereo broadcasts is entirely absent, and second it sounds wonderfully natural and spacious by comparison to almost all its tivals. Cymbals glint like stars coming out of an inky black night sky, whereas other tuners seem to suffer from light pollution. The overall effect is of a smooth and well balanced tuner with a powerful bass, crisp, three dimensional and detailed midband, and a natural, atmospheric treble. This is all tied together by fine dynamics and good rhythmic ability; this Sony lets songs breathe better than all but the very best tuners, so the music flows along with aplomb. Given that the Sony ST-S770ES does everything so well, it would be surprising if the side was let down by its AM performance. Obviously it has nothing like the quality of FM, but it is quieter, more stable and more full bodied sounding than any other hi-fi tuner I have heard. Radio 5 Live, for example, is far more listenable on this than anything else made in the nineteen eighties and nineties.

Sony has always made FM tuners, and has had some pretty special flagship models along the way, dating back to the ST-5950 which was the first to market in the UK with Dolby FM, way back in 1977. Sony’s ES line has always been its premium range, and the seven series was always the top product. The number of variations of this is bewildering; the ST-S730ES immediately preceded the S770ES from 1988 to 1990, and the ST-S707ES followed from 1992 to 1995. The 707 is pretty much identical to the latter, except for remote functionality via Control S connectors and IR sensor. The S730ES is sonically a step down from the 770ES, albeit still nice to have.

Prices range from £30 for a battered one on eBay, to upwards of £250 for a mint, boxed one in glitzy champagne gold with wooden side cheeks (most likely a German import in this spec). It’s a matter of taste of course, but the black brushed-aluminium version looks like a piece of broadcast equipment, so is surely the one to have. As ever, try before you buy if you can, and do get a one-owner example if possible, rather than one that’s been messed around with or moved around like a caravan. When carefully set-up, a good example with well-aimed FM aerial(s) will remind you just how good old fashioned analogue radio can sound.

Sony’s ST-S770ES is something of an open secret; those who have them know just how good they are, yet tend not to shout about them because they’re not particularly ‘cool’ in classic hi-fi circles in the same way that the Yamaha CT-7000 is. That’s why prices are still quite low, considering what they’re capable of. No nineties analogue tuner is going to cost a fortune in today’s world of internet radio, but still the fact that you can see these going for under £70 second-hand makes them bargains. Ironically in Germany, which usually has cheaper second-hand hi-fi than the UK, they tend to be more expensive because people know just what they’re capable of.