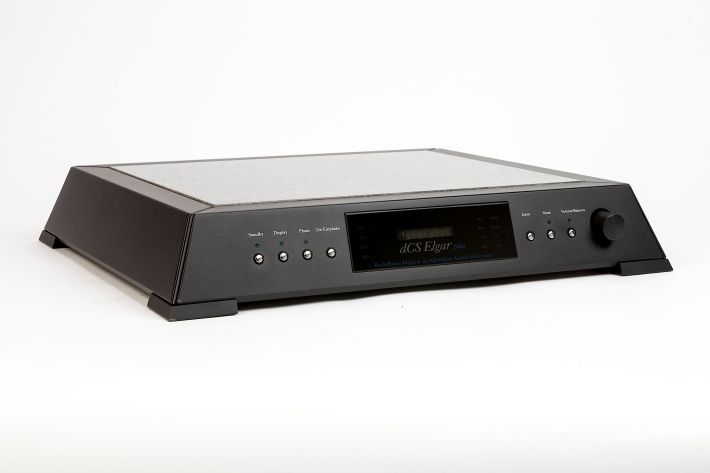 The nineteen nineties was arguably just as important for digital audio as the decade that proceeded it – because it saw the introduction of high resolution recording and playback for the first time. Whereas Compact Disc offered a ceiling of 16-bit, 44.1kHz operation, the new wave of DVD players that followed at the end of the nineties were finally able to deliver 24-bit, 96Hz stereo. Although this was tremendously important symbolically – laying the ground for the hi-res craze of today – there were practically no commercially available digital-to-analogue converters to play it. Suddenly though, a new name appeared apparently out of nowhere, launching the first hi-res capable domestic DAC. The dCS Elgar was at first able to handle 24/96 PCM; with its bespoke signal processing engine, compared to all of the other DACs on the hi-fi market, it was unique.

Founded in Castle Park, Cambridge back in 1987, Data Conversion Systems came to the hi-fi industry via a rather circuitous route. Unlike other British brands from that famous city of dreaming spires – which were set up by audiophiles to produce hi-fi equipment from the off – dCS actually began life as a defence contractor. Its speciality was, as the name suggests, number crunching. Founder Mike Story was a dazzlingly bright but by all accounts rather mercurial fellow, who – as legend has it – studied Physics at Oxford because the university didn’t offer an electronics course…

Story subsequently embarked on a PhD in electrochemistry, then left to start dCS along with venture capital backing and some clever folk from Cambridge Consultants. Soon, the company was scooping up key contracts from high powered defence companies, including Ferranti, Marconi Avionics and British Aerospace. Its specialist competence was radar, for which it originated some highly-powerful digital signal processing technology. This ended up in early nineties Harrier jump jets, in combat in the Bosnian war. Their radars proved extremely powerful, allowing the RAF to intercept Serbian helicopters better than the US Air Force F15s flying alongside them, so the story goes.

The end of the Cold War early in its corporate life forced a sea-change in the way dCS paid the bills. Those lucrative aerospace contracts began to dry up, and in its place the company turned to the broadcast world, doing all sorts of digital audio-related things for the BBC, for example. Mike Story began to transition the company towards audio, and adapt its expertise with DSP to the professional recording sector. Work began on the first dCS 900, an analogue-to-digital convertor using a similar approach to the company’s radar work for the Ministry of Defence. It was the first ever 24-bit ADC and featured the company’s unique, totally bespoke processing ‘engine’ that’s in all its digital converters even today – called the Ring DAC.

The 900 caused quite a stir in pro-audio circles. Music producer Bob Ludwig was an early, outspoken fan of the brand, as was respected recording engineer Tony Faulkener, and Bert van der Wolf at Northstar Recording was another early adopter. They reported that the dCS converter sounded far more detailed and immersive than rival designs, all of which used proprietary chips. Delighted with the success, dCS duly decided to do a matching DAC, the 950. This became the world’s first 24-bit digital to analogue converter, and it got a rapturous critical reception, and many orders from recording professionals.

Interestingly, it wasn’t just studio hacks that took to the dCS 950; many in the high end hi-fi world began using it too. It would of course play 16/44 silver discs with the addition of a suitable transport, and that’s what a number of well-healed Japanese audiophiles began to do with it. The company’s distributor in the land of the rising Yen was particularly energetic, and hawked it around recording professionals who in turn tipped off the specialist hi-fi press. At first it was very much a niche thing – the first dCS DAC being both very expensive and far from user-friendly. It came in an ugly box with rack mounts, but when powered up it made music in a different way to all the other rivals – thanks to its bespoke DAC and digital filter design. As the income from its consultancy work tailed off, so the dCS 950 began enticing well-healed Japanese audiophiles to open their wallets.

There was no shortage of standalone DACs by the mid nineteen nineties, so it was a brave move by dCS to launch its first ever domestic hi-fi product and only its third ever audio design. The former executive chairman of the company himself admitted that the 950 was “an ugly box”, so the priority for the Elgar was a more aesthetically pleasing look, and greater ease of use. Launched in 1996, the company produced precisely the right product at the right time. “We had assumed the only people interested were recording studios, but when the 950 came out we started realising there were commercial applications too”, Mike Story comments.

Unsurprisingly perhaps, dCS brought in a world famous industrial designer – someone with an illustrious track record in hi-fi design. Cambridge-based Allen Boothroyd was enlisted to style the casework. A man of many talents, he’s perhaps most famous for forty or so years of Meridian hi-fi designs, and also the award-winning Lecson AC1/AP1 pre-power amplifier. Along the way, he also did the iconic BBC Microcomputer. The plan was, in the words of one dCS insider, “to take the guts of the 950 box and make it a high end consumer product…”

Although this sounded straightforward enough, Elgar was not without teething troubles. It was supposed to debut at the 1996 New York hi-fi show, but the very first example was damaged in transit en route. Somewhat ignominiously, the company was forced to show it on a static display plinth, as a result. Soon though, the new DAC was wowing the hi-fi world. dCS show dems were the talk of the industry; they recorded music in 16/44 and 24/96 simultaneously using 900s, and played them back with 950s or the new Elgar – allowing people to hear the difference between CD-quality and hi-res digital audio for the first time. Stories are legion of people emerging amazed by what they had just heard. This proved a pivotal year for the company; it committed totally to hi-fi manufacturing and moved to a new factory just south of Cambridge. Elgar was the right product at the right time – perfect for working in conjunction with the new DVD format.

Like any Allen Boothroyd design, the unit has a visual ‘economy’ which makes it very nice to look at, even if it’s no longer the height of fashion. Finished in a very nineties shade of two-tone grey, it sports an equally nineties dot-matrix display centrally which is far more informative than rival designs of that period. Chromed pushbuttons offer Standby, Display, Phase, De-Emphasis, plus Input and Mute on the other side, next to the Volume/Balance control knob (which gives 0.5dB and 1dB steps respectively). Pressing the Display and Volume/Balance buttons together takes you to the set-up menu. It’s clean, simple and self-explanatory to use. Round the back, there’s a selection of inputs – two AES/EBU via XLR, coaxial and BNC. Balanced and unbalanced analogue outputs are present, with switchable voltages. The input receiver can be toggled between ‘Analogue’ mode for data sources with poor clock stability, and ‘Digital’ which is jitter-rejecting.

With the exception of Pink Triangle and DPA DACs of the day, every other rival to the dCS Elgar used bought-in digital conversion and/or digital filtering chips. Elgar was basically a digital signal processing computer in a box, and still sounds excellent by the standards of today; compared to its mid-nineties rivals it’s a revelation. Via 16/44 from CD, it’s so much quieter than its contemporaries, with loads more detail and a fine sense of transparency. Tonally you’d never call the Elgar warm or euphonic, but it’s never harsh and lacks the ‘metal-plated’ upper midband that many nineties digital convertors had. It’s also a good deal more lively, with a purposeful rhythmic flow that wasn’t common back then. Soundstaging is a revelation, wide left-to-right and offering the sort of depth perspective that most people hadn’t heard from silver disc. Elgar doesn’t suffer poor recordings gladly, but give it a good one and it allows its full glory to shine through.

On high resolution programme material, it’s better still – I can imagine how breathtaking it must have felt to have heard your first ever 24/96 digital music on it. Everything that it does well on CD, it does better – the soundstage widens and deepens further, the music flows in a more organic way, bass become better defined, the midband cleaner and treble silkier. This classic DAC doesn’t ‘gild the lily’ musically speaking – meaning it won’t make a bad recording sound good – but with top-quality source material delivers superlative sound. Of course, various high end modern DACs now do better – not least contemporary dCS designs (which run a much-improved version of the Ring DAC) – but Elgar can still mix it with today’s big boys and look good. Given that a good example can be had for as little as £1,000 if you look hard enough – and that dCS can service it and get it working right back to original specification, it’s an excellent second-hand buy. Collectors will love it – if ever there was a classic hi-fi DAC, this is it.