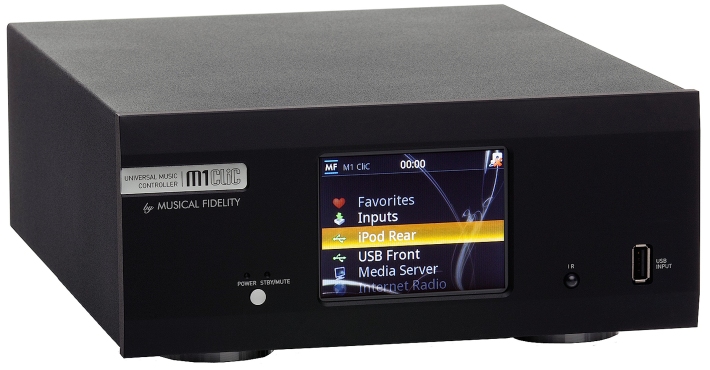 Launched in 2011 for £1,239, the M1 CLiC was an extremely impressive bit of kit in its day. Described as a preamplifier, DAC and network music player all in one, it seemed wonderfully versatile at the time. Pair it up to the matching £599 M1 CDT transport and you effectively had a CD player that did it all. Measuring 220x100x300mm, the front panel sports a 320×240 QVGA high resolution colour display, not quite up to iPhone quality, but is nevertheless clear and nicely sized. There’s a distinct absence of buttons; all twiddling is done via the supplied remote control.

There’s a range of options, from RCA analogue inputs to internet radio, network music from computer, RJ45 network, iPod (via a socket at the back), USB (via a socket at the front), plus two coaxial digital inputs. Add a Wi-Fi aerial socket, IEC mains and a choice of fixed or variable RCA phono outputs and it’s one of Musical Fidelity’s most crowded back panels! Inside, the design was said to draw extensively from the M1 DAC, which means it plays many file formats including FLAC (up to 24-bit/192kHz), WMA (inc. lossless), LPCM (24-bit/192kHz), Real Audio, Ogg Vorbis 4.0, etc. There’s a Burr-Brown DSD1796 DAC chip, and attention has been paid to power supplies and grounding.

Getting the system up and running is straightforward. The CLiC needs its supplied Wi-Fi antenna plugging in, and/or an RJ45 network lead from your wireless router. If you possibly can, I’d recommend a wired connection; whilst wireless worked faultlessly there’s always the chance that extra wireless signals being beamed around your room may in some way impinge on the sound. Via its settings menu, you tell it which type of connection you’re using, and then feed it the network key if necessary. This is all easily done via the remote. Then you simply select your source and you’re off; you might like to enter some internet radio favourites at this point, to save faffing around in future.

Having heard a good deal of the M series Musical Fidelity family with which the Clic shares a lot of hardware, I have to say its sound wasn’t a total revelation. As a CD player, this combo sounds clean and even and open. Plant Life’s ‘When She Smiles’ suited it perfectly; a slick, classy sounding slice of funk with a gentle, lolloping beat, the combo captured the mood perfectly. The long string glide set behind the drums and bass guitar shimmered behind the gentle groove; vocals were sugary sweet and expressive and the acoustic guitar work carried in a suitably subtle way.

Attached to the digital output of a CD player, bass is decently articulate, but like the M1 DAC it’s never quite as powerful as some rivals; it’s a light, flighty sort of sound that impresses with its superb midband and high frequency sophistication, rather than an iron fist low down. Vocals sound rich and textured in a way you don’t normally get from a £1,200 CD player of its era. Hi hats have a delicious delicacy and atmosphere to them. Working as a streamer, the CLiC sounded very similar to when it was number crunching a CD data stream, perhaps ever so slightly smoother and more diffuse. A fine soundstage was set up again, with oodles of detail and atmosphere, which pulled me in and held my attention determinedly. Bass was tuneful and articulate, showing the counterpoint with the snare and hi-hats in a most fulfilling way. As per the M1 DAC I wouldn’t say it offers the last word in dynamics, but is certainly good in this respect and excellent at conveying rhythmic and dynamic nuances in a song. Overall, it sounded extremely refined and polished, yet musically satisfying too.

From a ‘purple period’ in the company’s recent history, this holds up well seven or so years after its launch. It’s one of those really loveable niche products that Musical Fidelity has made a career of coming up with. A clean, open and smooth sound, allied to genuine ease of use and a largely glitch-free performance, what’s not to like?