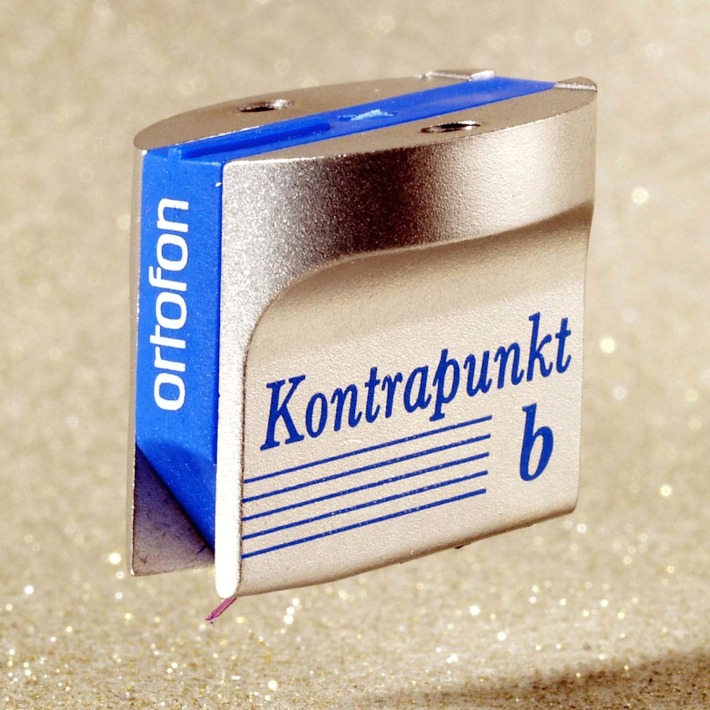 Back at the turn of the new millennium, Ortofon launched three new Kontrapunkt moving coil cartridges to commemorate the two hundred and fiftieth anniversary of the death of Johan Sebastian Bach. The a and b comfortably outsold the c, with all being subtly different to one another. For yours truly, the b was the pick of the range, with a Nude Fritz Geiger FG80 stylus tip with Ruby cantilever. Each had different colour schemes, but electrically they differed too – for example, Ortofon claimed the A put out 0.45mV, while the B managed 0.47mV. In most respects the cartridges were identical – the stainless steel bodies weighed 10g all in, and the manufacturer specified a tracking force range of between 2.2 and 2.7g (2.5g recommended) at a tracking angle of 20 degrees.

I have known Ortofon moving coils since the late nineteen seventies, and it’s fair to say they’re very good. Generally though, although the high end designs are beautifully detailed and have great finesse, they’re a little less involving than some – such as Lyras and Dynavectors. Not so the (£595 when new) Kontrapunkt b – I kicked off with Groove Armada’s I See You, Baby and was struck by its surprisingly punchy, vital nature. Whereas its MC30 Supreme predecessor would be worrying a touch too much about resolving detail and soundstaging accurately, this one dived into the groove and boogied. What a surprise to hear such a musical performance from a sensible Scandinavian!

I moved to Herbie Hancock’s Rockit, whereupon the Kontrapunkt went straight for the song’s sequenced Linn drums and threw out a dazzling array of rhythms and dynamics with heady abandon. Next up was some good old new wave in the shape of The Knack’s My Sharona and once again I was met with tremendous speed and dynamics and rock-solid soundstaging, a fantastically wide and bold recorded acoustic, lithe, supple basslines, a super-low noise floor and oodles of low level detail. The only downside is its slight treble bias, but don’t confuse it for distortion – despite its HF emphasis it’s a tremendously clean, low noise device that cuts through like a hot knife through butter.

Even by today’s high standards, I really rate the Kontrapunkt b. It has a certain character that really endears, making it stand out from the company’s range of generally more sober sounding designs. One of the most musically convincing Ortofon moving coils for a long time, it’s an excellent used buy for around £350 – if you can find a well-preserved, unsullied, boxed example.