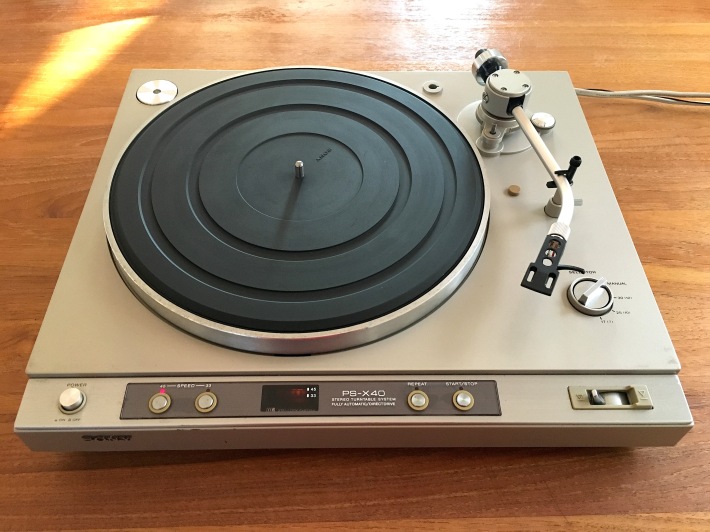 The nineteen seventies was ‘the Golden Age of Vinyl’, and Sony played an important part in making it so. Although the specialist audiophile market was preoccupied with belt-driven British superdecks such as Linn’s Sondek and Dunlop’s Systemdek, the wider turntable world was the province of quartz-locked, direct drives from Japan, with high degrees of automation. Every major manufacturer had products at price points from entry-level to high end, and Sony was no exception…

In 1978 the Japanese giant launched a new range of turntables that looked – at the time – ultra modern and were larger-than-average at 445x145x400mm including plinth and dustcover. The £180 ‘PS-X40 Stereo Turntable System’ was effectively the ‘entry level high end’ model, and offered superb measured performance at a – just about – affordable price. It completely passed the UK audiophile press by; Sony turntables tended to be regarded by those ‘in the know’ as little more than range fillers – the sort of thing you would buy at your local Sony Centre to ‘make up the numbers’ in a matching Sony system. As it transpired though, the PS-X40 was better than expected.

In truth this is not a great turntable, but still a good one that can make a very nice noise when fitted with a decent cartridge. It sports a raft of worthwhile technology implemented with care and attention. Superficially, the Sony’s slightly plasticky plinth is a let down – Technics did better in this market segment, using aluminium and rubber construction – yet the PS-X40’s base turns out to be made out of Sony Bulk Molded Compound, giving the deck an overall weight of 8kg and a general feeling of quality.

Sony’s superb Brushless Slotless Linear motor is fitted, complete with clever Magnedisc-controlled quartz lock. It uses an 8-pole monitoring head positioned on the inside of the outer rim of the 2.2kg, 320mm aluminium alloy diecast platter, to read magnetic pulses written into the ferric material deposited there. This feeds the data into the servo, which duly varies power to the DC motor to keep the platter locked on the correct speed. This makes for a vanishingly low 0.025% wow and flutter figure, almost half that of the pricier Linn LP12, for example. As well as spinning the platter up to full speed in half a turn, the deck has quick-stop electromagnetic braking. Like every Japanese direct drive of this era, it has an illuminated stroboscope – here recessed and behind a window – but unusually it doesn’t have variable speed.

Sony’s PUA-7 static-balanced, J-shaped pickup arm is made of 10mm diameter high tensile aluminium pipe; this is said to have eight times higher structural rigidity than Sony’s conventional armtubes. The version fitted to the PS-X40 is obviously cost-cut and lacks VTA adjustment, but is still a high quality thing that sits on a cast zinc alloy arm base. Its effective length is 216.5mm, overhang is quoted at 16.5mm, the cartridge weight range is 12 to 19g (including headshell), and the headshell itself weighs 10.5g. It has good quality bearings and is a pleasure to hand cue. There’s also a built in headshell holder, so you can keep a spare cartridge to hand and use it for parties, for example.

Being a mid-price Japanese deck of the late seventies, it of course has full automation. This means the luxury of feather-touch controls – unimaginable to any vinyl user of just a few years earlier – a repeat facility and front mounted damped lift/lower control. The fluid-filled feet are its only defence against ground-borne acoustic feedback, so you need to be careful with positioning, and its claimed signal-to-noise ratio is 73dB – impressive for 1978. Overall, the PS-X40 feels a quality item, but still not quite as well made as its Technics SL-1200 rival.

Sonically this Sony is surprisingly good, providing you site it well away from air- and ground-borne vibration, use a decent cartridge, and ideally remove the dustcover before use. Although not quite as gutsy as the Technics, it has a firm yet supple bass which extends up to a clean and open midband with wide soundstage and a smooth treble. It’s a little two-dimensional in depth perspective, but still sounds very spacious overall. Rhythmically it’s seriously good, if not quite as ‘get-up-and-go’ as the Technics; there’s a grip and focus to the music that’s unexpected for a mid-priced automatic turntable. Tonally the PS-X40 is a little well lit, but in no way would you call it harsh. Overall, it’s a more musically satisfying performer than you might imagine.

Even now there are still quite a few around, with a good example fetching upwards of £250 – good value if it has been well preserved. Although not Sony’s greatest ever moment, this relatively anodyne looking middle-of-the-range deck is impressive even by today’s standards, and shows just how redoubtable the company’s products were at that period. By 1981, the PS-X40 and the rest of the range were discontinued and replaced by a flimsier, slimmer line of vinyl spinners that were obviously cost-cut by comparison – and thus began Sony’s descent out of the serious turntable market, something it has never subsequently rejoined.