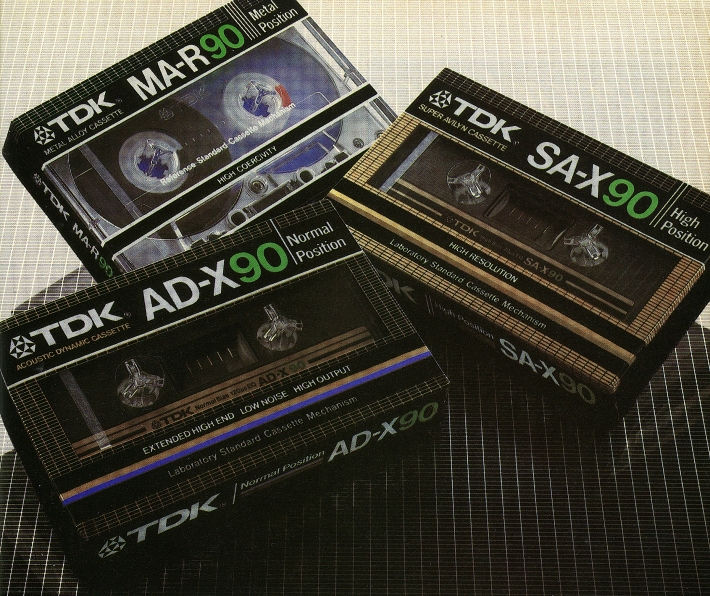 The story starts in August 1963, when Dutch electronics company Philips displayed a prototype of a small cartridge of magnetic tape designed to work in highly compact players that could be battery operated and taken anywhere. It was reversible, and offered up to forty five minutes per side, thanks to a very low tape speed of 4.76cm/s. The tape was the same found in commercial open reel recorders, being an Iron oxide formulation held on a Mylar backing. German company BASF was asked to supply its PES-18 formulation. Its meagre 3.81mm width was designed for mono operation; very little of the tape was exposed, making it a robust format.

Although well received, it’s fair to say that Compact Cassette’s reception wasn’t rapturous. Nevertheless, Japanese visitors paid special attention to the format, and it was reportedly heavily photographed. Philips didn’t restrict cassette to itself; a licence fee was asked from hardware manufacturers, whereas the actual cassettes themselves were licence-free.

In September 1963, German company Grundig proposed to Sony that the two companies collaborate on producing an international standard for cassette tapes, in a bid to exclude its Philips rival. Philips countered and proposed the co-development of their Compact Cassette format; this was agreed. There were disputes about royalties; Philips initially wanted 25 Yen per unit, then 6. Sony’s Norio Ohga refused, saying it would go with the Grundig system, causing Philips to drop its demand. It waived royalties for Sony, and subsequently made the technology open to everyone in 1965, when the Compact Cassette name was made official.

Early cassettes had very mediocre sound quality, not being designed for the hi-fi market. Japanese tape manufacturer TDK (Tokyo Denki Kagaku Kogyo K.K.) was the first to market with its SD (Super Dynamic) formulation. This was an evolution of its Synchro Tape formulation which first appeared in 1953 in open reel form and in 1966 in cassette form for speech applications.

With higher quality formulations arriving, cassette’s appeal began to broaden. In 1968 the first C120 was introduced, and then two years later Dolby B arrived, giving nearly 10dB noise reduction. Later that year, Dupont launched Crolyn, a CrO2 tape which BASF licenced and developed. Sony got an exclusive right to distribute the pigment in Japan. It gave an extended frequency response for more realistic treble.

In 1971, the Advent Model 201 became the first hi-fi cassette recorder, combining Dolby NR and CrO2 tape functionality. It wasn’t a big seller, but ushered in the hi-fi age. That same year, CrO2 equalisation was set at 70μs by the DIN committee, to reduce noise by 4.5dB; this also lowered the tape’s maximum output level. TDK released the first C180 in 1972, the TDK C-180LN. The following year, a generation of Ferric tapes from AGFA, Ampex, BASF and Memorex arrived using a new ferric oxide formulation. In 1973, Nakamichi’s 1000 machine appeared, a hugely expensive cassette deck conferring true audiophile credibility to the format.

The next big step for Compact Cassette was Sony’s Ferrichrome, a double layer formulation with a thin chrome coating over gamma ferric pigment. Because Sony had the exclusive rights to the chromium dioxide pigment in Japan, Maxell, TDK and Fuji were not allowed to produce FeCr tapes, and instead developed new formulations where cobalt ions were fixed to the outside crystalline structure, or set within the structure, to stabilise the pigment. Maxell’s Epitaxial, TDK’s absorptive Avilyn and Fuji’s Beridox formulations were born.

In 1979, Scotch launched its revolutionary Metafine. Produced by coating a plastic film with metal powder, it needed new heads made from a wear-resistant material, and also able to not saturate with their own flux at high signal levels. Amorphous metal or Sendust alloy was the only material fit for purpose.

Dolby C arrived in 1980, offering 20dB of noise reduction, effectively by using two Dolby B processors in series. This was followed in 1990 by Dolby S, based on an advanced professional spectral recording system; it gave 24dB noise reduction.

The early nineties also saw a new generation of ‘super metals’, introduced. Sony launched its Metal Master, TDK brought in MA-XG, That’s introduced Suono, Maxell launched Metal Vertex. They featured expensive and ultra high quality shells, along with the very latest tape formulations. This was arguably the high water mark for Compact Cassettes; the quality was very high and competition was fierce. Tape formulations had been refined hugely; TDK said its particle sizes had reduced by a factor of ten since its first tapes, for example, with the magnetic energy of each particle almost doubled.

By the late nineteen nineties, all the major cassette manufacturers were scaling back production. The format was on the wane, after some thirty five years, replaced by MiniDisc in some markets and, increasingly, MP3 in others. Computer audio was arriving on the scene, and stealing cassette’s cheap and convenient mantle. Ironically though, by the time of its demise in the latter part of the first decade of the twenty first century, the little tape in a plastic shell was capable of great sonic performance, superior to Compact Disc. Once a largely irrelevant format designed for dictation, Compact Cassette became the staple diet of music fans world-wide, and a serious audio format to boot.