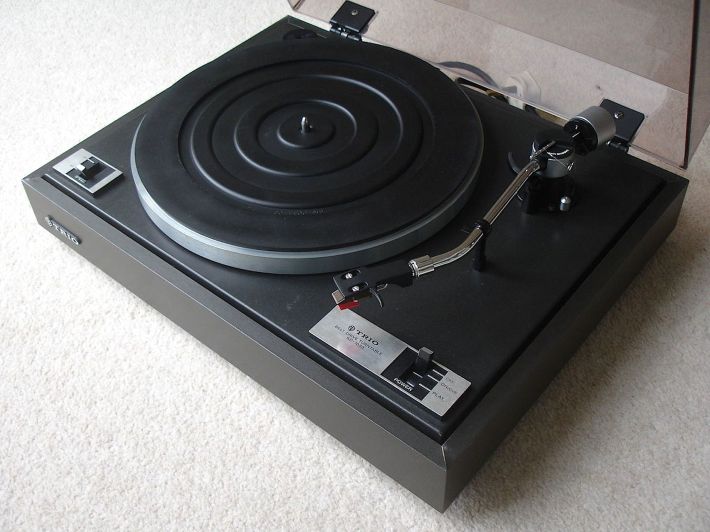 The Pioneer PL-12D changed everything. It was the point at which established British manufacturers such as BSR and Garrard found themselves denuded of their core market – entry-level turntables. Suddenly in 1973, for a few pounds more than the price of a clunky, idler drive Garrard SP25 mk IV you could buy a far slicker belt drive deck with Japanese build quality. Naturally, the PL-12 was an instant sales sensation, but Pioneer’s rivals weren’t going to sit back and let them get all the glory forever…

Kenwood – or Trio as it was known in the UK – replied with this, the KD-1033. It was pretty much a close, albeit slightly superior, copy of the PL-12D. It sported an independently sprung subchassis which sat on leaf springs in a modest, lightweight vinyl-wrapped chipboard plinth measuring 456x347x145mm, complete with smoked plastic dustcover. It was a two-speed design with a 4-pole synchronous motor turning a light, diecast zinc alloy platter – topped with a soft rubber mat – via a square section belt. Speed stability was good at the price; 0.06% WRMS wow and flutter was far superior to the Garrard, and a signal-to-noise ratio of (better than) 48dB made it quieter too. This matched the PL-12 point for point.

The Trio’s J-shaped, stainless steel tonearm was fractionally better though; it tracked cartridges at up to 3g, and was just about able to run reliably at half that. Compared to the SP25’s industrial feeling straight tube pick-up arm which was happier between 2.5g and 5g, this was pure exotica – the Trio’s 215mm (effective length) arm was a whole league better than the Garrard’s, and had far lower friction too. The great thing was that it was just good enough to considered real hi-fi, and that was all most buyers wanted.

What it had over the Pioneer was slickness and ease of use. It was also a little more clean and modern looking. The controls were light to the touch, the deck clicked between 33 and 45RPM crisply and there was a sense of general solidity and precision that the market hadn’t seen before. Weighing 6kg, it was sturdy enough to resist acoustic feedback well, and the compliant springing of the deck made it a little more immune to environmental vibrations than its rivals.

Sonically, the KD-1033 was sweet, smooth, stable, civilised and refined. You’d never call it punchy or dynamic, but it certainly gave a grown-up sound which people had previously never encountered from a £50 turntable. It was just a little more spacious and open sounding than the PL-12, but the differences weren’t great. The B version of 1976 added a slightly better mat and headshell, although vinylistas of the day usually replaced the stock, resonant aluminium version with an ADC magnesium one pretty sharpish, anyway. It was the big seller and from around 1977 until the advent of the Dual CS506 in 1980 it ruled the budget turntable roost in the UK.

These days, there are still plenty of Trio KD-1033s on sale, because they were big sellers and have stood the test of time well. Most have Shure M75s, Ortofon FF15Es, Grado FTEs or Audio-Technica AT-95s or 110s fitted, and are all good matches. A good modern cartridge choice would be the aforementioned AT-95E, which is still available new for under £30. The ‘B’ suffix, incidentally, stands for black finish; there was also a silver finished ‘S’ version which sold better towards the end of the deck’s life. KD-1033s sell for anything between £50 and £100 depending on condition and provenance – you can’t go far wrong with one as a starter turntable, so keep your eyes peeled!