Back in the early nineteen seventies, the main purveyors of turntables in Britain were Garrard and BSR, with the likes of Lenco, Dual, Philips, Collaro and Balfour also providing some popular designs. Many were auto-changers, and often appeared in then-popular radiograms of the day; for audiophile purposes they were far from ideal. At this time, the Japanese were beginning to encroach upon the market, but it wasn’t until the Pioneer PL-12D arrived in 1973 that the cat well and truly got amongst the pigeons…

Whereas the likes of the Garrard SP25 mk4 were fairly crude, noisy rim-drive designs, the PL-12D was far more sophisticated in relative terms, with a well-implemented belt drive system that turned in a decent 47dB rumble figure. It ran far quieter and more smoothly than the budget Garrards of the day, and had a slightly larger twelve inch spun zinc-alloy platter compared to the SP25’s ten inch pressed affair, for better disc support.

It also sported a better, longer 221mm S-shaped tonearm with SME-style detachable headshell and well-adjusted radial bearings. Again, this was much silkier in operation than the Garrard, was beautifully finished and fitted with an adjustable counterweight and an anti-skating device. It was completely manual too, being focused at the budget audiophile market who wanted lower friction bearings instead of automation; it was inevitably one or the other. The slightly pricier semi-automatic PL-12S model proved unpopular in the UK, which demonstrates how strongly the manual version appealed to cash-strapped enthusiasts.

Whereas a Garrard SP25 would set you back around £40, the Pioneer cost £55. It was a world away from the British design and looked, handled and sounded so much better too. Whereas the former struggled to track crude cartridges like the Shure M75-6 (£8 in 1975) the latter’s arm was good enough to handle the more expensive Shure M75ED2 (£12 in 1975), which had a far-superior elliptical stylus and tracked at between 0.75 to 1.5g compared to the 3g that the Garrard’s M75-6 spherical tip ploughed the groove at. Its lightweight arm matched perfectly, the deck and cartridge together became a classic combination; the vast majority of these Pioneers were sold with it.

The motor is a four-pole AC synchronous type, meaning that the speed is locked to the mains frequency and cannot be adjusted. Because of this, the deck is set to run ever so slightly too fast lest the mains frequency drop and make the deck too slow; it turns in a respectable wow and flutter figure of 0.1% WRMS (the Linn LP12 of that time was 0.05%). The full sized (430x161x349mm, 7.5kg) deck itself includes a dustcover and plinth – amazingly, these were optional extras for the SP25 in its early years – and sits on springs that do a good job of isolating it from the outside world. Indeed, in this respect it’s considerably better than its PL-112D successor, which was not sprung at all. These springs should be damped by foam rubber; if it has disintegrated in your particular example then you can always cut up a sponge and fix them!

The result is a pacey sound that is bright and lively, yet decently refined too. Indeed the M75ED2 is a pretty forward cartridge – very dramatic sounding, and much fun – and the Pioneer is smooth enough to tame its excitable nature. By today’s standards it’s a little opaque and two dimensional, but still highly listenable. Today, Pioneer PL-12Ds are still fairly easy to track down but are beginning to become collectable, so prices are edging up. You can still pick one up for under £100 and it’s very good alternative to a modern entry-level Pro-Ject or Rega, but with great classic cachet.

The PL-12D was top of the UK’s turntable pops for about three years. In 1977 the Trio KD-1033 arrived, offering the same formula but with a fractionally better sound and more modern appearance, and then followed Sansui’s SR-222/II a year or two later; this was an altogether more refined design that made the Trio look dated. It was 1979’s Dual CS 506 that really broke up the Japanese party however; for just under £90 in 1980 it was of far better quality and – in its cheaper CS505 guise a year or two later – went on to dominate the eighties budget vinyl scene until Compact Disc finally prevailed. 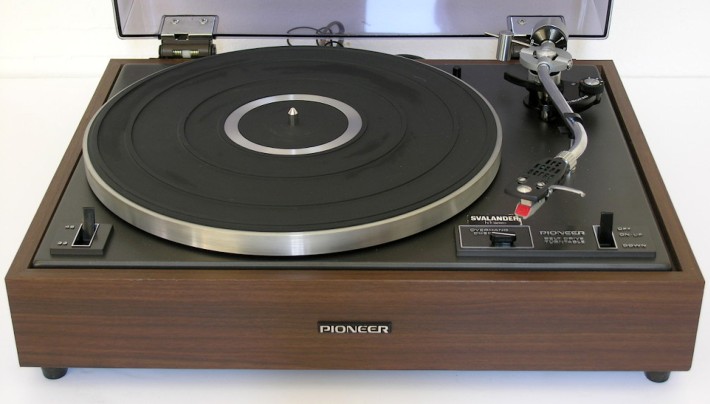