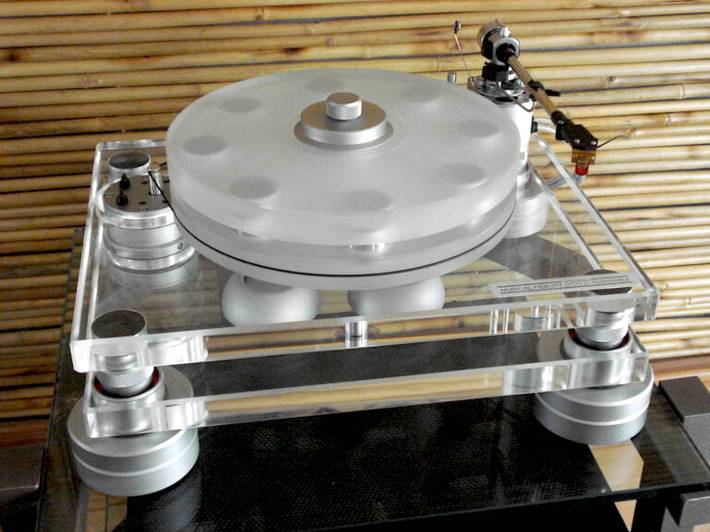 Ah yes, the Musical Fidelity turntable. Currently residing in the ‘where is it now’ category, the M1 appeared on the analogue scene just under a decade ago and caused more of a ripple than a splash, for a fleeting moment. Interestingly though, it didn’t sell well and the ever intrepid Antony Michaelson soon moved on to other things. I wrote at the time that doing the M1 was either “bold or foolish”, and it was probably a bit of both.

The M1 was born at the time the vinyl revival was really beginning to bite. There had been talk of it for years – no, make that decades – but by the middle of the first decade of the twenty first century, it had established a foothold. At the lower end of the market, the likes of Pro-Ject and Rega were going great guns, and sales were strong for higher end decks too. It was becoming clear to some of us that LP would come to outlast CD, bizarre as it sounded to many at the time!

Straight out of the 2005 turntable design manual, it shows us in 2015 that things have not moved on much. Companies like Clearaudio are still doing big, bold and imposing belt drives with a lot of Perspex in them, albeit slightly more elegantly now. Certainly at its launch though, the M1 was an impressive and imposing beast. Unsurprisingly it was not a conventional Linn/Thorens-style enclosed subchassis, ‘plinthed’ design; instead the chassis sat on a double, decoupled acrylic base. Each chassis plate was of a different mass, thereby putting their natural resonance points are at different frequencies. The double pole isolation system between both chassis plates is both vertically and horizontally compliant thanks to rubber suspension, and also has a very low natural resonant frequency. I did find those huge feet a bit vulgar, but they certainly did their job.

The inverted bearing ran milspec high carbon steel ground to better than 5 micron tolerance, with a 0.1 micron surface finish. At the top of the shaft was a high quality ball bearing in milspec high carbon steel, machined to a spherical accuracy of better than 2 microns. The surface finish was claimed to be better than 0.1 microns. The outer shell was made from high tensile stainless steel with a milspec brass insert which has a tightly toleranced lubrication spiral. The contact point between the outside shell and bearing was a closely toleranced PTFE pad.

An impulseless DC motor (what MF called, “the most expensive brushless motor available”) was used, with accuracy controlled by an optical sensor mounted on the motor which continually monitored shaft speed. This was fed into a 16-bit microprocessor running a ‘fuzzy logic’ algorithm to control the DC drive voltage. MF claimed speed accuracy within 0.2%. Unusually, a rotary pitch control was fitted giving a semitone (i.e. 6%) of adjustment, with a centre detente to indicate precise speed. As was common practice by then, the power supply is in a separately shielded box, along with the electronics which drive the motor.

When the deck came out, I remember being particularly interested in the tonearm. The £582 SME M2-9 had never been seen before on a British turntable, and the M1 came with one supplied as standard. It was obviously an updated 3009S2, with a straight, internally damped stainless steel/alloy armtube and a new, detachable, angled headshell. The machined bearing housing looked familiar to vintage SME fans, but was height adjustable via a thumbwheel mounted at the armbase, and tracking force was set by a calibrated counterbalance weight. The ‘weight and pulley’ bias compensation system was retained – despite looking rather crude it did the job. I was impressed by the whole package’s feeling of solidity and engineering excellence. The motor, bearing, the plinth/suspension isolation system were all very well made, as was the (then) new arm.

The M1 turntable is an impressive performer, being solid, smooth, detailed and naturally musical. I remember thinking that it wasn’t a ‘character turntable’ in the way that the LP12 is, rather you got a very even and unshowy reading of whatever was on the disc. Antony Michaelson told me he was using a Thorens TD124 as a reference, and in many ways the M1 sounded very much like this, but in a modern setting – with much more resolution and grip. There was a calm ebb and flow to its sound, underpinned by a very solid bass and mastertape-like ease and unflappability.

Compared to a similarly priced Michell Orbe, I found the Musical Fidelity a little lacking in soundstage width, but just as good in depth terms and ever so slightly more lucid sounding. The MF had capacious left to right imaging, but didn’t seem to run the recorded acoustic quite as far back behind the speakers as the Orbe. The treble on both decks was superb – open, even, smooth, neutral. The M1’s light, airy, spacious soundstaging and flowing musicality contrasted to the slightly more ‘technical’ sound of the Michell.

The M1 was an interesting ‘plug and play’ turntable-and-tonearm package then, offering excellent sound, variable pitch (appreciated by all musicians, an irrelevance to the rest of us), and acres of sexy Perspex to impress your friends with. Sadly though it didn’t quite hit the spot at its £2,999 launch price, and I think this was due to the quality of the existing competition (Michell, SME, Avid) as much as it was down to any failings on the M1’s part. There’s also the oft-forgotten allegiances that dealers have to brands, and this may have made many retailers less eager to push it against existing, strong-selling turntables. We’ll never know quite why it didn’t catch on, but it is now becoming collectable. Secondhand prices are variable, due to rarity; very few were ever made.