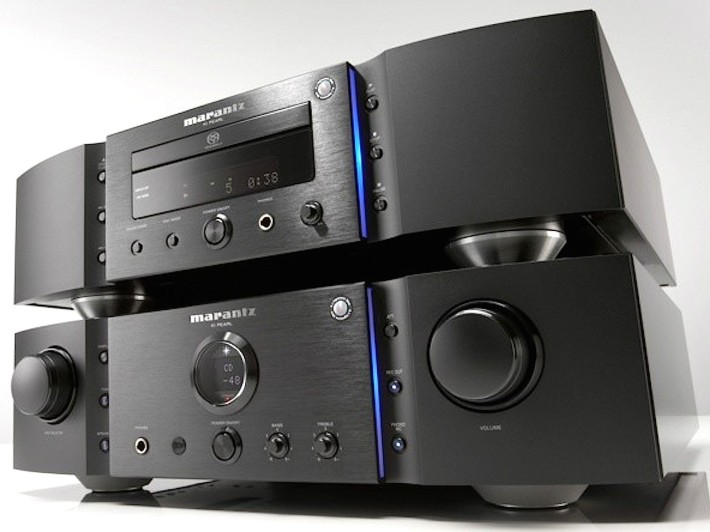 The British launch of the Marantz KI Pearls in Autumn 2009 was a suitably auspicious affair at The Ivy in London’s Soho, with Ken Ishiwata making a speech to a room of assembled journalists in which he traced his career trajectory, beginning by pointing out that he was born in 1947, the year before CBS in the USA officially introduced the mono LP. “But they had started to promote the format in 1947, the year I was born! What a coincidence eh?”, he added, with glee. The Pearls were a sort of monument to himself – they’re unique, and limited, and designed very carefully to work together. “I simply wanted people using KI Pearl to have the same experience as I did all those years ago, listening Julie London on my friend’s father’s Model 7C preamp”, added Ken. And each Pearl purchaser gets a special thirtieth anniversary book, plus a special SACD recording, made by the man himself, of old jazz standard numbers.

Most obvious, from the outside, about the Pearls is the unique ‘silk black’ finishing. Many people reminisce fondly about the glory days of Japanese high end, when every product came immaculately finished with battleship build. Well, they’re not over, as these separates show. Actually, almost everything Marantz makes north of £1,000 has a lovely finish (and the cheaper ones are still excellent), but the Pearl is even better still. It’s not just the chunky brushed alloy front panels either, as the entire cases are immaculately presented and the tops hewn from 5mm aluminium. The controls move with a silky action, and the ambient lighting producing a faint blue glow either side of the front panel centres, is lovely too. The rear panels are just as well presented too.

Looking at the sizeable (440x419x127mm, 14.5kg) SA KI Pearl SACD player in detail, it sports a nicely aligned disc loader with a damped Xyron disc tray; it’s not the world’s slickest but is still far smoother than most the price. The feet are large aluminium affairs, and confer a sense of solidity, as does the heavy copper-plated chassis inside. “High quality audio components” are fitted inside, according to Marantz, and there’s a chunky encased toroidal transformer. The mech is an SACDM-10, driving a Cirrus Logic CS4398 DAC chip, with a variable position digital filter (switched by a front panel button). Marantz HDAM-SA and SA2 op-amp modules are used. One great feature is the optical digital input, along with a front-panel-switchable DAC mode – it’s normal now, but was very clever in 2009. The Pearl SACD plays stereo SACD and CD, plus MP3 and WMA discs.

Whereas the silver disc spinner is a no-frills product, the PM-KI Pearl integrated amplifier is more of a jack of all trades. It’s most certainly not a stripped-out minimalist design, sporting as it does tone controls, a MM/MC phono stage and a good range of line inputs. Although slightly bigger (440x444x127mm, 20kg), it’s an excellent visual match for the SA-KI, and shares construction details, including the thick alloy top cover and feet, copper chassis with heavy bottom player and audiophile components. A symmetric parallel PCB layout featuring high grade audio components including Shottky diodes is used, along with HDAM-SA3 and HDAM-SA2 Hyper Dynamic Amplifier Modules and a large EI power transformer. There’s a low noise backlit LC display (switchable), tone controls plus source direct switching to take the tone controls out of circuit (recommended). Marantz claim 90W RMS per channel into 8 Ohms, and 140W into 4. Swish WBT speaker binding posts complete the picture around the back.

Marantz’s SA-KI Pearl CD player is an endearing performer, even by today’s standards. It’s very detailed but you couldn’t accuse it of being biting. Indeed tonally it’s a smooth, mellow machine but with an awful lot of grip when you listen more intently. This player isn’t full of bombast, desperate to pound out the beat in an overblown way; instead the music floats along in a delicate but emotionally engaging way. Bass is tight, taut and insistent while the midband is open and expansive. Treble is silky, and like the midband possesses a lyricism and subtlety that Japanese products often lack.

The KI Pearl integrated amplifier is a big smoothie; it sounds obviously warm across the midband and silky in the treble. There’s a good deal of well controlled bass too, but don’t conflate this warmth with any lack of passion or musicality, as it can be engrossing to listen to. The Marantz lilts along in a most believable and lyrical way, the amplifier displaying very little in the way of transistor ‘hash’ that greys and sullies the sound. It’s a Class AB amp alright, but it doesn’t sound conspicuously so. A tad out of focus compared to a Class A Sugden it may be, but this doesn’t make it any less nice to listen to; quite the reverse in fact.

Working together as a system, the Marantz KI Pearls make sweet music. There were few £2,500 CD and amp separates on the market at that time that worked as well together. It’s a soothing, sensuous and silky listen that gets under the skin of the music and unwraps in front of your very ears. The two products are sophisticated hi-fi separates which were carefully designed, beautifully built and cleverly voiced to deliver the musical goods. They’re excellent on their own, but together the Pearls really fly. Unsurprisingly those five hundred units sold out soon enough, but still appear occasionally for upwards of £900 a pop. For an easier-to-find and more affordable bite of the cherry though, you can always go for the Pearl Lite CD and integrated, which sell secondhand for half this.