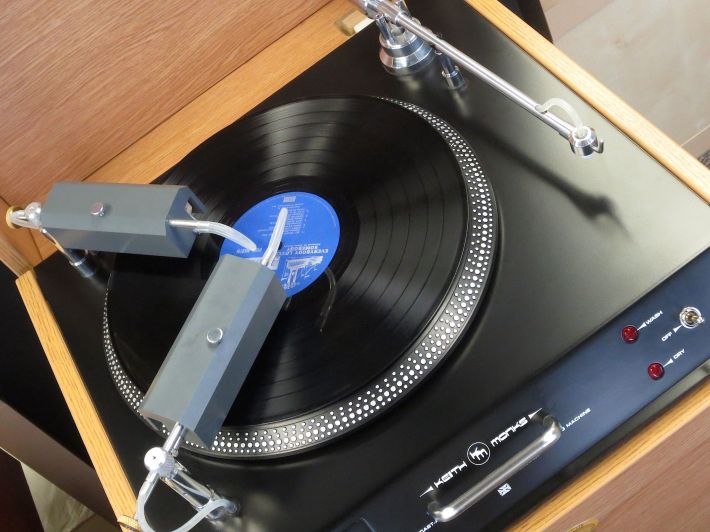 “Other products are available”, as they say, but traditionally the Keith Monks Omni was always the one that serious record collectors recommended – as well as being the choice of the record libraries of august broadcast organisations like the BBC. It’s undeniably an important product in the great scheme of vinyl things…

The story starts with the technical editor of Gramophone magazine, Percy Wilson, back in 1965. He’d originally introduced the original concept of record cleaning in his book, The Gramophone Handbook (Methuen, 1957) in which he suggested applying a mixture of lubricating oil and vinegar followed by washing in soapy water, rinsing with tap water, drying with a flannel, treating with antistatic liquid and running through with a Dust Bug. Percy proclaimed that although “rather tiresome, (it) should prove effective.” Eight years later, his ideas were developed in a paper for the Audio Engineering Society. In “Record Contamination: Causes and Cure”, he discussed the relative merits of wet and dry cleaning LP surfaces, and started working on prototypes of devices which could solve these problems. At the same time, Frank Ockenden, John Wright and Mike Beville formed a company called Audio & Design to put their ideas into practice.

The ‘Record Doctor’ employed four different devices to clean the record – a liquid applicator, groove scrubber, ‘suction mop’ and spinning brush – was huge and over complex, both to manufacture and use. But it was effectively the predecessor to what became the Keith Monks Record Cleaning Machine, as its creators then approached Percy after reading another paper of his on record cleaning. A prototype was developed with Percy as a consultant on the project. Extensive work followed, and finally in 1968 one Keith Monks was taken on to market the device. Five pre-production units were built, and the team prepared to concentrate their efforts on the biggest prize in European broadcasting: the BBC.

At that time the BBC were rolling out an expanding number of stations broadcasting in stereo on the VHF (FM) band, and the quality of the medium demanded new heights in quality, clarity, and minimal noise – so the time was right for the RCM. One Monday morning in early January 1969, five days before the meeting with the BBC, Keith turned up for work as usual, only to find the place shut up. The bank had withdrawn their support and the company gone bankrupt. Well, Keith went ahead with the meeting anyway, and came away with a letter of intent for three machines.

He duly bought the rights from the liquidators, Keith striking it lucky with his bank manager who turned out to be a hi-fi enthusiast – and thus the company was born. Soon after, the Head of BBC Radio Engineering called a meeting with the BBC Governors, which led to the first of many orders from the Corporation. Sales grew throughout the nineteen seventies, and by the eighties the RCM was in use at most major radio stations worldwide. In 1977, a special silver Record Cleaning Machine was even presented to the Queen for her Silver Jubilee, with Keith summoned to Buckingham Palace to demonstrate it to an apparently delighted Prince Charles! The death of Keith Monks in 2005 effectively saw the end of the machine, but his son Jonathon has gently reworked the basic design, substituting some key parts for improved reliability and longevity.

Lest we forget, vinyl is no longer made in serious quantities, forcing analogue addicts to buy ever more second-hand discs. As used black plastic becomes ever more popular, then so prices creep slowly up – or in some instances, not so slowly! The temptation then is to buy cheaper vinyl and put up with the snap, crackle and pop. Well, if you’ve got one of these, you at least have a chance of restoring cheap charity shop records to better than new condition. Of course, if the surfaces are scratched or worn, even a Keith Monks machine won’t help, but given a decent basic disc, this gizmo can work wonders. Moreover, it doesn’t just clean the surface, but does a ‘deep clean’ in the groove(s), removing some of the gunk that’s been stuck in there since the day it came off the press. The result is that the record can (and often does) actually sound better than new.

Although working the Keith Monks Omni is quite simple and relatively foolproof, the machine itself is quite a complex piece of good old fashioned mechanical engineering. It has a number of subsystems, all of which have to work together – a bit like a great big Meccano project. Built with professional broadcast organisations in mind, it gives the impression that it’s built to last, and feel almost over-engineered for domestic use.

The heart of the machine is the turntable motor, which is a heavy duty direct drive affair designed for continuous operation.  This drives the platter, on top of which is a special new design of mat made of rubber and triangulated, so any excess cleaning fluid lying on is going to drain into the mat’s recesses while the points of the hundreds of small rubber triangles support the record itself without getting it wet. This main motor is used to spin the record on both wash and dry cycles, but there’s another, smaller motor which works on the dry cycle only, driving the suction arm via a small thick flat section belt, pulling it from the inside ‘run out’ groove out to the outside ‘lead in’ groove as it sucks up the fluid.

Working in conjunction the arm drive is what Jonathon Monks calls, “probably the biggest, coolest, quietest vacuum pump in the industry”. It’s a German made medical-grade design, used for kidney dialysis machines, and so is used to continuous operation. This sucks the fluid up from arm on the drying cycle, and is set to work at 20in Hg – in accordance with the original Percy Wilson design. Jonathon adds that any more suction can exert too much force on the record and make the nozzle leave spiral marks on the disc. As with the arm drive motor, the suction pump only works on the dry cycle.

The final part of the equation is the wash pump. Although the cute little retro-styled knob is the only thing visible when the machine’s user, underneath lies the same compact hand pump used in the classic Mini motor car, before it went to an electric device in the early nineteen seventies! Actually, although it’s manual, it works effectively and is all that is needed to do the job of wetting the bristles of the fine artist’s brush hair cleaning block.

Just like a car bonnet, the top of the machine pulls up and rests on a stay. Performing this relatively simple operation (with the aid of the chromed handle in the middle of the fascia) exposes the innards of the machine, showing the various pumps and motors in all their glory, along with the bobbin that holds the thread that runs, one quarter inch per operation, past the tip of the suction arm. You also get easy access to the fluid jars; one to supply the special cleaning fluid, the other to collect the dirty stuff that comes off the disc via the suction arm.

The machine works in two cycles – wash and dry. The wash cycle uses a special applicator brush to apply the special Keith Monks fluid whilst the record is spinning at 80RPM. Cleaning is a case of placing a record on the platter, flipping the right fascia mounted switch upward for ‘Wash’, moving the applicator brush over the record on its swing arm, and then wetting it – then the record – with the fluid. This is done by depressing the pump knob on the left, which sends fluid to the brush’s bristles, which duly runs down uniformly to the disc, covering it evenly. Press down on the surface of the record with the brush, then lift off, then press down again for a few seconds, and the first part of the operation is complete – time taken about ten seconds.

You then have your record surface soaked in fluid – so it’s time to dry it. Flip the switch to dry, and then you can move the suction arm across to the inner, label part of the record. This duly moves across the surface, slowly sucking off all the fluid, depositing it in a storage jar inside. This takes another twenty or so seconds, and then it’s time to repeat the process with the record’s other side. This done, you should really put the record in a brand new, polythene lined inner sleeve – replacing it in the original inner will simply move a good deal of the dirt back on to the surface of the disc.

It works almost faultlessly; even a novice will be cleaning their prized vinyl fairly quickly after a set up procedure akin to a turntable – this is detailed in a comprehensive instruction booklet. My only issue was the process of applying the fluid by the hand pump in the wash cycle, until I got the hang of it I found it a bit too much ‘all or nothing’. One moment you haven’t put enough fluid into the brush and the disc surface isn’t properly wet, the next you’ve put too much on and it’s sending surplus fluid all over the shop! Still, a few sessions has you doing it right – after which you can get totally professional results, time after time. The great thing is how unfazed this machine is about the condition of the disc; you can give it really nasty discs which then come out completely clean – no job is too big for the Keith Monks. In also works the same, again and again, without fault.

Obviously, this machine cannot magically remove scratches, inner groove wear or warps, but it still dramatically cuts noise on previously unplayable discs. On dirty discs it restores near silent surfaces, and on clean discs, it gives inky-black silence where once was a slight crackle. It removes scunge, static and mould release agent – bringing a striking improvement in sound to dirty discs and even brand new, unplayed discs sounded better. When records are mass produced, a lubricant is applied to ease the discs out of the presses. This is a waxy oily substance, some of which sticks inside the record groove. It has a relatively benign effect, but does cause a little congestion of the sound, effectively reducing the stylus’s ability to accurately trace the groove. The Keith Monks RCM uses special fluid which gets right into the groove – made entirely from botanicals and other plant extracts with pure distilled water – which removes much of the MRA, and the benefits of this are clearly audible even when cleaning a brand new record.

Subjectively, this translates to a deep, more powerful and tuneful bass – this wasn’t just my imagination, as I heard it on every disc I tried. There’s also a cleaner midband, more low level detail and a wider, more open treble with extra air. This can result in a slightly brighter, less muffled sound – the machine removes some of the fluffy, opaque, sheen of the disc making things sound better focused and more open. I even noticed a slight improvement in the ability of the disc to image ‘out of the speakers’, but most obvious to me was that more musical, tuneful and deeper bass.

When relaunched onto the UK market at the end of the last decade, this machine cost £2,995. Considerations of value depend on how large your disc collection is and how great your commitment to the vinyl format is. Obviously most machines will sell to record libraries and broadcasting organisations, but I can see that some well heeled domestic audiophiles buying one too. Surprising as it may sound, it improves the performance of brand new, unplayed discs as well as making distressed records playable once more. As such, analogue addicts will all find it a very nice thing to have.